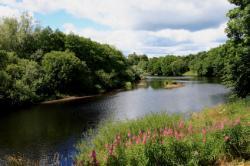 The River Tyne is formed by the confluence of the North Tyne and the South Tyne at Waters Meet at Warden Rock, near Hexham in Northumberland. It flows through some of the most picturesque countryside in North East England before passing through the great industrial areas near its estuary.

The North Tyne has its source north of Kielder Water , on the Scottish border. It flows through the rugged Kielder Forest but passes no major settlements before meeting the South Tyne. The South Tyne rises at Alston Moor in Cumbria . It flows through the lovely Northumberland town of Haltwhistle , a popular tourist destination due to its position near to Hadrian's Wall . It also runs through Haydon Bridge which, like Haltwhistle, is in the valley often known as the Tyne Gap. The South Tyne rises close to the sources of two other major rivers associated with the industrial North East, the Tees and the Wear .

The combined rivers flow through Hexham on the way to Corbridge , which is also in Northumberland. It then heads into the county of Tyne and Wear between Clara vale on its south bank and Tyneside Riverside Country Park on the north bank. After this it enters the urban areas of Newcastle and the Borough of Gateshead , or North and South Tyneside. It divides Hebburn and Jarrow on the south bank from Wallsend and North Shields at the point where the Tyne Tunnel, finished in 1967, links the south and north banks for vehicle and pedestrian traffic. There is also a separate and much older pedestrian and cycle tunnel here.

Several of the bridges over the Tyne are internationally recognised landmarks. The High Level Bridge crosses the Tyne Gorge and opened in 1849 and was designed by the famous railway engineer Robert Stephenson . It has two levels, or decks. The lower carries a road and the upper the railway.

Perhaps the most iconic of the crossings is the Tyne Bridge. Opened in 1928 the bridge links the City of Newcastle with the town of Gateshead. Its similarity with the Sydney Harbour Bridge is no coincidence as it used a modified design taken from the Australian bridge, which was already under construction at the time plans were drawn up for the Tyne Bridge.

Situated close to the Tyne Bridge is the famous Swing Bridge. Opened in 1876 part of the bridge can be swung open horizontally to allow the passing of ships. This was once a vital feature as the industrial centres on Tyneside depended on ships and barges for transport.

The latest bridge built to cross the Tyne at Tyneside is the Gateshead Millennium Bridge. This is a striking structure that can be tilted to allow the passing of water transport. This feature, and its distinctive curved shape, have led to it being known as the 'blinking eye'.