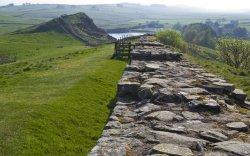 Two thousand years of history, twenty-five roman forts and museums , 150 miles long  the border territories of Northumberland are steeped in history and intrigue. When the Romans first occupied Britain in the middle of the first century, for much of the time until the beginning of the fifth century, Northumbria was the very edge of their mighty empire. The Emperor Hadrian, in 122AD, ordered the building of a wall which was to stretch right across the country, from the Solway to the Tyne , to mark the division between and separation of, the Britons and the uncivilised Picts. It has become one of the most important monuments built by the Romans in Britain and one of the best-known frontiers of the entire Roman Empire, regarded as a testament to one of the worlds greatest civilisations.
Believed by many to be a kind of Scottish border, at no point over its entire length does the Wall separate the two countries - the largest part of the English county of Northumberland is actually north of the Wall and the tribe known as Scots came to Britain from Ireland, hundreds of years after the Romans had left.
Officially recognised as a World Heritage Site in 1987, it ranks as one of the wonders of the world. The remains of the central section of the great wall still wend their way across the whinstone cliffs on which it was built two thousand years ago, in spectacular countryside with dramatic and wild landscapes. In addition to the Wall, the Romans also built forts and temples, of which the remains of many can still be explored.
Hadrians Wall Country is the name given to a spectacularly scenic corridor, which runs ten miles north and ten miles south of the Wall with an 84-mile signposted trail stretching from coast to coast with links to over 80 short walks for people of all ages and abilities. This is an essential place to explore for anyone interested in backpacking, walking, cycling, bird watching, or just enjoying the open countryside, wildlife and peaceful, spectacular scenery of coastal flatlands and saltmarshes, rolling countryside, rugged moorland and dramatic upland ridges, of which the most famous is located between Hexham and Haltwhistle , regardless of the time of year. Overlooking the scenic Northumberland National Park to the north and the North Pennines Area of Outstanding Natural Beauty (AONB) to the south, this is stunning, unspoilt countryside which offers a chance for an unforgettable experience of nature in the wild. Add to the mix the ancient castles , restored forts, timeless ruins, historical background, charming towns and villages and vibrant cities, every season offers something different for visitors to this unique area, in which the only real link is the Wall itself.
In addition to its Roman history, Northumberland has seen many historical battles, against Scots, Vikings and Danes. In Anglo Saxon times, the King of Northumbria was the most powerful king in England, later, the Lords of Northumberland wielded great power, charged with protecting England from the Scots. So there is also a history of revolt and rebellion against the government, usually led by the then Dukes of Northumberland, the Percy family of whom Harry Hotspur is mentioned by Shakespeare in his plays about Henry V and a number of historic castles can be found throughout the area such as the royal castle of Bamburgh , from before the unification under one monarch. Alnwick , Warkworth and Dunstanburgh are others with historic significance.
Today, still largely rural, Northumberland is the least populated county in England, with much of the county protected as the Northumberland National Park, an area of outstanding landscapes stretching from the Scottish borders and including Hadrians Wall, with its historic significance and scenic beauty.