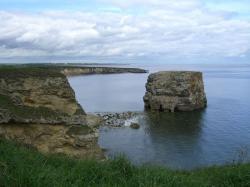 Marsden Rock is a picturesque rock formation found on the North East
coast in Tyne and Wear, England. Its once memorable arch collapsed in
1996 resulting in one large and one small stack of rock. It was
decided by engineers in 1997 that the small stack was too unstable to
be left standing and on the 26th March 1997 it was demolished with
explosives. Overlooking Marsden rock you can find Marsden grotto.
built ingeniously into a nearby cave. This bar and eatery was
originally built as a home for a local quarryman before becoming a bar
and inn in the middle of the 1800s.