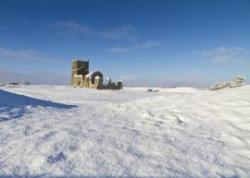 Thomas Hardys celebration of Christmas in Dorset in his early novel Under the Greenwood Tree is perhaps second only to A Christmas Carol (a version of which can be seen at Shaftesbury Arts Centre on December 7th by the way) in our literary Christmas cannon. The simple pleasures enjoyed by the Mellstock musicians  a dance, singing, and plentiful drink  are one way of marking the festival in the county, but there are plenty more to be found.

First, of course, you will need to decide on your Christmas base in Dorset . It may be a cliché, but for many of us merely sitting in front of a roaring fire is part and parcel of the whole Yuletide ritual. Preferably with something restoring to sip. In past times the gathering of farm workers around a giant Yule log  with beer and cider to hand  was in Dorset called a Christmas brown, a custom that seems worth perpetuating. If you dont possess grate and chimney in your own home then consider renting a cottage or grander house for a week or so near the sea, or in the pleasant back-country of this most rustic of counties. Theres still time to gather a group of friends to share your celebrations in a cosy little party, or a larger one  this site lists plenty of self-catering places where a week will probably cost less than treating the family at a posh metropolitan restaurant.

Alternatively you can have someone else do the cooking while you kick back and relax: Dorsets famous resorts like Bournemouth , St Leonards, Swanage, Poole and Lyme Regis have hotels from Boutique to decidedly palatial, and inland at places like Blandford Forum and Bere Regis youll find old coaching inns and country house hotels, some complete with crackling log fire. If you have the flexibility theres no reason to limit your visit to a week over Christmas or New Year  with December apparently set for a big chill that cottage fire sounds great for a quick break, and at this time of year a walk in the country or along deserted beaches like the famous and fabulous Lulworth Cove is particularly special.

There are plenty of simple, bucolic even, pleasures on offer in December Dorset that Thomas Hardy would recognize. The National Trusts Kingston Lacy at Wimborne Minster has lots of events stretching over the month  on the 8th hand-bell ringers; the 9th a carol choir, for example. Sherborne church has a Christmas Tree Festival from the 1st to the 9th, and the whole town of Bridport is dedicated to Christmas trees from the 5th to the 12th. Dorchester has a Christmas concert  with the traditional mulled wine and mince pies  on the 19th, Wimbornes is two days later.

Adults may want to stay by the fire, kids appreciate the chance to get out to a panto to scream: Hes behind you, and Oh yes it is. And so do most parents in truth. Bournemouth has Sleeping Beauty (with panto legends Su Pollard and Colin Baker in the cast); Weymouth offers Jack and the Beanstalk; and Poole proffers Aladdin with Don Maclean as the dame.

More recent additions to the Christmas scene can be enjoyed here too, with happily more than a few involving food and drink. Like continental markets  theres a French market at Dorchester on the 7th and 8th; and lots of others like it. Langton Matravers has an art and craft festival from the 3rd to the 7th. There is (oxymoronically) a modern tradition that would have made Thomas Hardys eyes pop out  as it does to the participants. On Christmas Day itself there is a fancy dress swim at Charmouth Beach. Not for those with a dodgy ticker, or you might say for those possessing a central nervous system either. But it raises lots for good causes. Nearby Lyme Regis has its Lyme Lunge at the Cobb Beach on January 1st.

Start your plans for a Dorset Christmas by checking out our accommodation in the county; and by dreaming about a glass of local cider supped before a Yuletide fire, and a Dorset Knob  no, theyre biscuits.