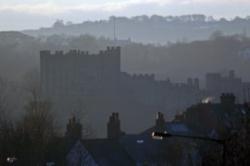 Land of the Prince Bishops

County Durham is not perhaps well-known as a tourist destination, that very fact surely making it worth visiting, but it does enjoy a wealth of different attractions from a revitalised shoreline via the beauties of Durham City to the Dales in its western part, with plenty of museums and monuments to its historic and industrial heritage.

The best known aspect of the area is of course Durham City itself, with two un-missable and buildings: Durham Cathedral and the unbelievably lovely Durham Castle, both Norman structures. There are modern sites in the city, but its total of 600-plus listed buildings says much about its preservation, and the medieval layout is well suited to strolling in search of treasures architectural, retail and gustatory. The large university student and teacher population makes for a place well-served with bars, cafes and restaurants, and there are unexpected pleasures too, like the opportunity to take a boat-cruise.

Durhams coast was once ravaged by industrial use, but is now designated a heritage area, with the shoreline and promenade at Seaham perhaps the best place to start  certainly so for qualified divers as the seabed off the town is a forest of wrecks from many periods. The entire coast is known for the excellence of its fishing, another diversion worth giving a go.

For those wishing to add to their store of knowledge via museum visits the area is a rich one: the Beamish Museum north of Durham is part-theatrical part-educational and all fascinating, famous worldwide. At Killhope in the North Pennines to the west of the county the lead-mining past is graphically explained, with among other artefacts a huge water-wheel, though by way of contrast they offer lovely woodland walks too. And of course this area was the cradle of the railway, nicely presented at Locomotion  The National Railway Museum in Shildon. Once museums were about things under glass cases, but happily that is seldom the case today, and certainly not with the three above.

Some 40 miles of the Pennine Way lie in Durham, a challenge on their own but a far bigger one for those attempting the full trail. The North Pennines Area of Natural Beauty is pretty self-explanatory, the clever re-use of former railway land as pathways frequently offering walkers ways to tramp the countryside away from cars.

Teesdale at the far west of the county contains part of a national nature reserve; the great highlight here is High Force Waterfall, which claims to be the largest waterfall in England, and is certainly one of the most beautiful and spectacular, reached by a pretty woodland path.

After Durham City, Barnard Castle, in Teesdale, is probably the best known urban destination for visitors, with its lovely old market place and butter cross, and its fabulous ruined castle above the river. The perhaps unexpected gem here is the Bowes Museum, a magnificent Victorian building housing an equally magnificent art collection including paintings by Goya, El Greco, and Canaletto, along with clocks, automata (the swan is famous), clothes and tapestries. Just a few miles northeast of Barnard Castle is another of the areas historical treasures, Raby Castle, 14th century with many additions, surrounded by elegant parkland.

County Durham, the land of the Prince Bishops and of George Stevenson, which pretty much sums up this region of contrasts, which too few British people know.