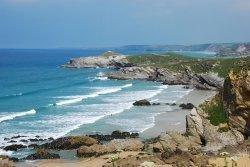 For those who have decided for whatever reason  green conscience, the dreaded credit crunch, or maybe simple curiosity  to holiday in Britain this year, Cornwall offers the closest thing to being abroad without crossing the seas. The North Cornish Coast is surely one of the most beautiful stretches of Britains seashore; and there is plenty of it, stretching from Lands End at the extreme south to Bude before Devon is reached. Cornwalls coast as the rocks wriggle rather than the crow flies stretches just shy of 300 miles, and the northern part is a good half of that.

Lands End is of course famed as the starting point for long distance walkers, but no need to aim for John oGroats, enjoy the South West Coast Path established in the late 70s. St Just nearby gives a taste for the diverse nature of this region: it has abandoned tin mines, and an abundance of standing stones and other prehistoric remains  plus the intriguing Selus Stone with Roman and even Greek markings firing the imagination.

St Ives 10 miles or so north has long been the haunt of artists, and those visiting it will see why Barbara Hepworth and Ben Nicholson among others moved there for the light and the ever changing seascape, plus the cosiness of its steep streets.

Another saint, St Agnes, has three gorgeous beaches  for the younger kids little else is needed on sunny days except a bucket and spade and parental eye  and a lot of 19th century character.

Newquay is different again, Britains surfing centre with a very young summer crowd enjoying the nightlife and the fantastic beaches  and some of those wearing surfing gear are actually surfers too. Newquay is not the place for quiet cream teas. With its own airport the town gets lots of metropolitan visitors dropping in for a few days R&R, giving it a pretty cosmopolitan feel.

If the kids hit Newquay their foodie parents make for Padstow, or Padstein as some now dub it, with the wonderful Rick Stein, god of British seafood, having at the last count five eateries there. Stein has done much to promote our enjoyment of the riches offered by our coasts, persuading a generation that there is more to fish than a batter coating and lashings of vinegar. Just dont expect to walk in and get a table by the window  book in advance.

Trevose Head just to the south of Padstow has caves which make you think of smugglers bringing in French brandy, ah har me lads! But if you do admire them dont forget the danger of the rising tide  something to bear in mind all along the beautiful beaches in the region, some of which are quickly cut off by the water, with the cliffs behind them sometimes steep enough to test Chris Bonnington.

Ten miles more and you reach Tintagel, with its ruined castle and wealth of Arthurian legends, though other places in the area lay claim to a part in that story too. The view of the castle looking out towards the sea is one hard to better in all Britain.

And then there is Bude, a resort when Victoria was just a Princess. The beaches here again are terrific, and some rival Newquay for the quality of the surf. And behind the town, as is the case all along the coast, there are some unspoilt stretches of rural England that even in summer can offer peace and quiet in the curved and sunken lanes.

The North Cornish Coast has a wealth of tiny coves; fantastic fishing; about 1000 places to buy tasty pasties; history and pre-history; some perfect village pubs; and they speak English there. What more could you want?