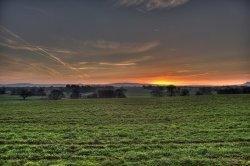 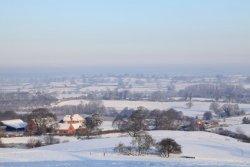 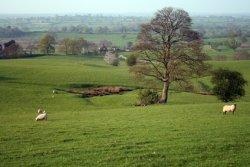 There are many sides to the historic county of Cheshire, some  like the fine city of Chester  better known than others. Our destination of the month for October invites you to consider a trip to the eastern side of the county, it peaks and plains.

It is a cliché of travel literature to call somewhere a place of contrasts, but in this case it is hard to avoid. The area has some of the finest shopping in Britain; and beautiful rocky hills. It has nationally celebrated stately homes and gardens; and an inspirational industrial heritage. The most famous telescope in Britain reaching to the stars; and the finest collection of stationery engines in the UK, some designed to help us reach into the earth. Hangouts for footballers wives in Gucci and high-heels; and hikes for waterproofs and walking-boots

In very general geographic terms the area can be described as being bounded by the countys borders with Derbyshire and Staffordshire to the east and south, by the M6 to the west, and the M56 and M60 to the north. Given it has possesses those three motorways for easy car access, and includes Manchester Airport, this is somewhere that is easy to get to from most points of the compass in mainland Britain.

You could focus on one aspect of the district, but given its breadth of attractions wed recommend a bit of a smorgasbord, dipping in and out as the fancy takes you, and as your needs for an October half-term break or sneaky getaway dictate.

It would be a sin to come to this area and not visit Jodrell Bank. Even though its visitor facilities are in mid-revamp there is a 3D theatre and an exhibition area, and those iconic radio telescopes to fire the imaginations of young and old alike. If you are not interested in science and space, the 35-acre arboretum on the site could suit you better.

Where Jodrell Bank reaches to the heavens, Anson Engine Museum in Poynton celebrates decidedly earth bound machinery - stationary engines  which is not to say that you dont get to see stuff move here. Some of the engines, as is fitting for a place located where a colliery once stood, are a link with the mining past.

For the walking, fresh-air breathing, sight-seeing and incidentally good pub finding part of the trip make your way to the Macclesfield Canal. And if you are in the Macclesfield area you really should visit the picturesque mill-town of Bollington, which quite coincidentally happens to have its own brewery. If you are tramping the canal the town is on your route anyway, along with Marple, Higher Poynton and Congleton, the latter the sort of bustling market town where it is a pleasure simply to stroll around  and have a pint in one of its inns.

Macclesfield is the same but more so, with its silk-producing past to be explored in the towns museums, and a great feel to the place that is a mix of current prosperity, medieval charm and solid industrial history. Dont expect too many flat streets either. Incidentally, for those curious about our textile heritage Quarry Bank Mill north of Wilmslow is another place to fit into the itinerary.

A more demanding outing for the walking gear can be found easily in the countys share of the Peak District National Park, including spots like the wonderfully named Wildboarclough, Pott Shrigley and Kettleshulme. A little outside that park but with some spectacular views and plenty of room to fill the lungs is Teggs Nose Country Park, south east of the silk town  from one side you can gaze over much of the plain opening up beneath, from the other delight in the rugged hills of the Peak District.

After all that walking and sight-seeing you could feel that some retail therapy is in order. Head to the northern part of the district for this, with no need to venture all the way into Manchester. If youre tight for time Hoopers in Wilmslow could be the recommend  a distinctly posh department store with a restaurant where you can spot the famous faces and see where they kit out their kids and kitchens. Or make for King Street in Knutsford, wine bar central and the boutiques favoured by the clientele thereof (it cant hurt that Knutsford is a lovely old town either). Alderley Edge and Prestbury are equally affluent, with the independent shops, jewellers and restaurants to prove it. The highlight for some of us is definitely Granthams on Heyes Lane in Alderley Edge, arguably the best fine food and wine store in the county, which is saying something  you could spend a fortune on their charcuterie alone and it would be money well spent. Alternatively Macclesfield has the famous Arighi Bianchi interiors store for a touch of the cosmopolitan, and a fine market for more grounded spending.

The famous names of the past concentrated rather more on the grandeur of their homes than on their shoes, shirts, suits and sofas as their contemporary equivalents seem to. In East Cheshire they left a legacy of fine  magnificent even  stately homes and mansions. Finest of all here is surely Tatton Park between Mobberley and Bucklow Hill, nationally renowned for its annual RHS event, but with fabulous gardens to fill the senses year-round. A few miles east from Jodrell Bank is another of the great houses of Cheshire, Capesthorne Hall, Jacobean in style though actually from the early Georgian era, and owned still by the family that built it in 1726. Another five or six miles south east brings you to the third of these vast houses, the Tudor half-timbered Gawsworth Old Hall near Warren, which of all three can claim the most fascinating past  one of its residents a candidate for Shakespeares mysterious Dark Lady lauded in his sonnets; another the last true jester in England.

As a relatively small area, roughly 25 miles wide and 30 long, it makes sense to establish a base for your break rather than moving from place to place  unless you are walking it or biking part of the Cheshire Cycleway. Information Britain has a wealth of accommodation options for you to browse through here, as diverse as the district itself  cottages, inns, town-centre hotels chic and modern, characterful and classical, and country house establishments for a touch of grandeur to name but five possibilities. Happy hunting, and enjoy the break.