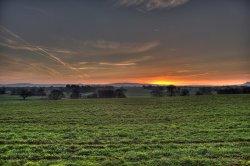 Bromborough
Did you know that Bromborough in the Wirral is thought to be the first place the Vikings from Dublin ever settled on the English mainland? That ancient link is demonstrated with a Viking cross in the local church. A great battle in which five English kings died fighting the Norse and Scots was also probably fought here in 937AD, 35 years after the settlement was established. A buried longboat was recently discovered at Meols a few miles away.
Chester
Did you know that under a Tudor law it is supposedly illegal for Welshmen to enter Chester after nightfall  and apparently legal to shoot them with a bow and arrow within the city walls there after midnight? Please dont test the law!
Did you know that Chester Racecourse is Britains oldest sporting venue (in continual use) with the first race occurring in 1539? Racing at the Roodee replaced a particularly violent traditional local football fixture, the substitution thought up by Mayor Henry Gee  hence apparently gee-gees.
Did you know that the first person to walk across Chesters Grosvenor Bridge was a young Princess Victoria ? It was opened by her mother on October 17 1832, but not opened to the public until the following November.
Did you know that Chesters Rows are unique not only in Britain but (in this precise form) anywhere in the world? The covered walkways on four of the main streets of the city allow create double-decker shopping there, and have done so according to records since at least the 13th century.
Did you know that the Roman amphitheatre in Chester had seats for 7000 spectators? Deva (Chester) was one of the most important Roman settlements in Britain.
Macclesfield
Did you know that a local legend attaches to the famous flight of 108 steps from Water's Green to St Michael and All Angels Church in Macclesfield? It is said that anyone who can make it from bottom to top without taking a breath on the way will have a wish granted. The cynical, however, might wonder if any such claim was based on a quick stop in the pub where the trek begins.
Winsford
Did you know the largest working salt mine in Britain is at Winsford? Worked since 1844, for a period between 1892 and 1928 it closed, unable to compete with neighboring mines, but when they hit difficulties Winsfords mine reopened. It uses the worlds largest underground digger, weighing in at 130 tonnes, and over the years has cut 135 miles of tunnels beneath the Cheshire countryside, yielding 1,000,000 tonnes of salt annually: and still local councils never seem to have enough rock salt. A disused part of the mine, by the way, houses part of the National Archive and other important records.