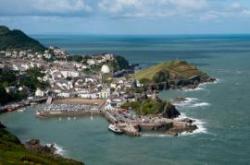 The Resorts of North Devon

Devon is the only county in England with two separate coasts, north and south. It is the latter that is perhaps better known and more visited - a very good reason surely to explore the former!

That suggestion is immediately supported by even the briefest look at the westernmost resort in North Devon, Clovelly . This privately-owned village  there is an entrance fee to pay  on Bideford Bay is sheltered to the rear by dense woodland, the trees and the cliff location combining to produce a very clement microclimate. It is a stunningly pretty spot, all white cottages that recall its days as a fishing village, and with enough character for ten such settlements: consider the restriction on cars, their function in part taken up by donkeys, or by the famous sleds that slide goods down the steep street towards the harbour.

Inland from Clovelly sits Hartland , though it has its quay on the west-facing shoreline beneath Hartland Point . Visitors tired of the sea (how could this be?) can enjoy the beautiful house and Gertrude Jekyll-designed gardens of Hartland Abbey , which also hosts regular events of interest  especially events theatrical and horticultural.

Working our way east we come to Westward Ho! , notable of course as the only British place-name with an obligatory exclamation mark, but special too as a resort that was actually planned as such. The Victorians loved the seashore as much as we still do, and the town as it stands today grew out of their wish to be beside the seaside, the initial hotel followed by villas, and then more recently holiday parks . No wonder it enjoys such popularity, the sandy beach is vast, and the waves here great for surfing (can we bring ourselves to say dude?). The perfect spot for good old fashioned digging-up and building sandcastles and whole canal-systems with bridges. And thats not just for kids is it, Isambard Kingdom Dad?

Near Westward Ho! sits the local centre of Bideford , a small and pretty port that makes for a contrast with the sands of its neighbour. The old bridge joining the east and west parts of the town, spanning the River Torridge , is a sight well worth seeing here. Appledore to the north is another quiet spot  though noted for its local ice-cream, so maybe for some of us particularly worthy of a side-trip.

At Woolacombe its back to the beaches, some of the area just inland fine enough to be protected by the National Trust s ownership, and the slightly spooky sounding Morte Bay between Baggy and Morte Points a regular best beach award winner thanks to its clean sands, surf-friendly swell, the protection it gets from those two points bookending the spot, and a big bonus on clear days, the views of Lundy Island directly westwards. It takes no imagination at all to understand why this is part of the North Devon Coast Area of Outstanding Natural Beauty. Take to the South West Coast Path hereabouts to enjoy a different perspective on the area.

Ilfracombe has its beaches too, loved by tourists since the early 19th century, but by way of contrast the town can offer a wealth of other attractions  how about a restaurant decorated with Damien Hirst artworks? Or other takes on art in the many galleries here. The Landmark Theatre is another cultural draw. In season too, for something decidedly different, there is a ferry that will transport you to Lundy Island, a trip of a little under two hours  another runs from Bideford by the way.

Where Ilfracombe is nationally known, the far smaller Combe Martin is a bit of a local secret, nestling in a sheltered cove within its own bay, with cosy pubs to keep you inside, or the beauties of Exmoor National Park  Lorna Doone country - just inland to tempt you away from the shore. For a change of scenery for the kids there is a wildlife park nearby too.

Lynton and Lynmouth are the conjoined twins of the North Devon Coast, Lynton atop the cliffs, Lynmouth below, the fabulous cliff railway (a highlight for those of us who love such things) ferrying visitors and locals between the two. Thomas Gainsborough loved Lynmouth for its scenery, and the intervening centuries have not notably altered the beauty of the place with its picturesque harbour, the gorge, and the pretty cottages.

It is probably for the beautiful beaches, the atmosphere that still so often reigns here of a quiet fishing village that just happens to host visitors  and the seafood in places by the way, and lets not forget the local cider  that you will plan your break in North Devon. But inland the previously mentioned Exmoor National Park must merit a trip. The radical change from sheltered shore to windswept moor is one to be savoured, and the opportunity to stretch the legs without getting sand in shoes may be welcome for adults and kids alike. And then its back to the seaside for some more of the breeze, the boats, the buckets and spades, and the boards. Dude.