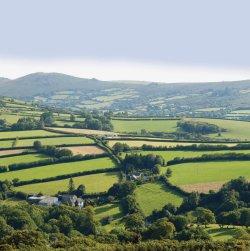 Ashburton
Did you know that Ashburton was the first town in Britain to have a Monster Raving Loony Party Mayor? Local publican Alan Hope first gained public office for the OMRLP in 1983, when elected to Ashburtons council; and in 1998 he became Mayor of the town. After moving to Hampshire he was elected to Fleet Town Council, and contested the Witney seat in the 2010 general election, narrowly losing to David Cameron by only 33,739 votes.
Bideford
Did you know that the last witches to be hanged in Britain were three women from Bideford in Devon? They were tried and executed as late as 1682, the case against them including such incontestable evidence as a tabby cat taken to be the devil entering a shop owned by a witness; and a magpie alighting at the window of one of the accused. Bang to rights then. They were tried on August 19 1682, and hanged outside Exeter six days later.
Brixham
Did you know that the Hymn "Abide with Me" was written in the garden of the Berryhead Hotel in Brixham by Henry Francis Lyte in 1847? Kelso -born cleric Lyte was months from death, asthma and bronchitis slowly weakening him. The hymn has become a British institution , sung at FA Cup Finals since 1927; and reputedly played by the Titanics Band as the ship sank beneath the waves  Edith Cavell too is said to have sung it as her German firing squad took aim.
Dartmouth
Did you know that Dartmouth is home to the oldest working steam engine in the world? It was built to the design of locally-born Thomas Newcomen in the late 18th century, and its working life included use as a pumping engine on the Coventry Canal .
Did you know that the worlds first Jack Russell dog was bred by a Parson born in Dartmouth called - Jack Russell ? The cleric was a keen hunter, and bred the dog to flush foxes out of their holes without hurting them, so as not to spoil his sport (or what he regarded as such depending on your standpoint).
Exeter
Did you know that Exeter Guildhall is the oldest civic building in Britain (1468) still in use today? Parts of it date to 1160, though it was altered and augmented in 1330, 1468 and 1591. Full council meetings and grand functions are still held there. Within is contained the oldest civic seal in England (1175).
Did you know that Exeter was unique in medieval Britain in that it had a man-made drinking water system that brought pure spring water into the city? There are passages still to be found under the high street that were excavated in the 14th century for this. The passages have become a tourist attraction, accessed via Paris Street in the Princesshay Quarter. The downside to the original system, by the way, was that it used lead piping.
Exmouth
Did you know that A la Ronde in Exmouth is unique, the only 16-sided Georgian home in Britain? It was supposedly designed by Jane Parminster, who lived there with her cousin Mary. The building, a charmingly odd mixture of country cottage and Byzantine styles, was intended to showcase the curios they collected during a 10-year Grand Tour made very unusually for the age with two other women. A la Ronde therefore could be regarded as the full stop on an early feminist statement.
Plymouth
Did you know that Plymouth boasts the oldest working commercial bakery in the world? Jackas of Southside Street on the Barbican were baking at the time of the Armada (1588) and baked biscuits for the voyage of the Pilgrim Fathers in 1620?
Did you know that Plymouths Roman Catholic Cathedral was designed by Joseph Hansom who also designed the worlds first taxi - as in a 'Hansom Cab'? He also designed the Catholic Cathedral in Arundel Sussex and St Walburges Church in Preston which has the tallest parish church spire in England.
Did you know that the childrens rhyme Old Mother Hubbard was written in Yealmpton near Plymouth? Sarah Catherine Martin wrote it while staying there in Kitley House, now a hotel. The subject of her pictures and verses was supposedly the housekeeper, but it is thought Martin at the very least built on existing folk verse, which some claim was a carefully hidden criticism of Wolsey and Henry VIII.
Westward Ho!
Did you know that Westward Ho! in Devon is the only town in Britain named after a novel? It is also the only place-name in the country (and one of only two in the world) that uses an exclamation mark. Charles Kingsley , best known now for The Water Babies, published Westward Ho! in 1855, its initial setting the neighbouring community of Bideford in Devon. The novels success was harnessed by developers, with Kingsleys approval: they first built a hotel named after the novel, then villas, the settlement logically taking the hotel's (thus the novel's) name.
Did you know that the oldest golf course in England still in its original setting is that of the Royal North Devon Golf Club near Westward Ho!? It was built on common land in 1864, the layout designed by Old Tom Morris. The oldest English club is actually Blackheath, which can trace its roots back to James I who is said to have brought the game south of the border.