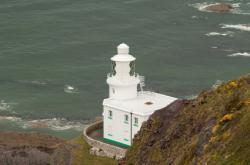 The Hartland Point, or peninsula, is a 325 ft high rocky outcrop, found on the northwestern tip of the county of Devon in England. It lies three miles north-west of the village of Hartland and is part of the North Devon coastline. The point is at the western limit of the Bristol Channel and marks the boundary of where it gives way to the Atlantic Ocean. The Romans called this point the "promontory of Hercules". The region is one of Britains many natural treasures, with a rugged shoreline with high open moorland and ancient woodland inland. Picturesque coastal waterfalls tumble from hanging valleys down onto rocky shores. The valleys above the shoreline are ideal for wildlife and their sheltered micro-climates support an abundance of wild flowers, rare lichens, culm grassland, insects, birds and animals. The point is home to a lighthouse, now automated and run remotely. The former lighthouse keepers cottage was demolished to make way for a helipad as the road to point is precarious and plagued by rock-slides. The region has several beaches such as Hartland Quay.
The cliffs at Hartland Quay have incredibly contorted rock layers in them, and are typical of the geology of the region.