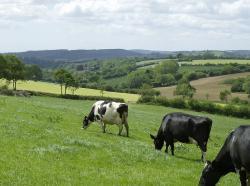 The Blackdown Hills range along the Somerset-Devon border in south-western England. The hills support an extensive range of wildlife and were designated an Area of Outstanding Natural Beauty in 1991. The Blackdown Hills contain 16 Sites of Special Scientific Interest.

Evidence has been found that suggests human occupation since the Iron Age . Surviving fortifications include the remains of ancient hill forts, Norman motte-and-bailey castles and from more recent conflict; Second World War airfields. There are ancient buildings such as Dunkeswell Abbey and early churches in many of the villages. The Church of St Peter in Staple Fitzpaine has a Norman doorway reset in the south aisle. The chancel dates from the 14th century and the north aisle was added when 'new' windows were put into the church during 15th century. The tower dates from about 1500. The church has been designated by English Heritage as a grade I listed building.

Just to the north of Culmstock is Culmstock Beacon, one of a chain of Elizabethan beacons built to warn of the coming of the Spanish Armada. Hemyock Castle was established in the Culm Valley when work began to fortify the existing manor house in 1380. Parts of the castle walls, towers and moat still remain. They are a scheduled ancient monument and visitors can view displays of history and archaeology.

The Blackdown Hills offer grassland, heathland, meadow and mire to host a great variety of wild life. Barn owls and nightjar enjoy the sanctuary of the sparsely populated hills. The Heath Spotted Orchid and the Green WInged Orchid are among the rare plants hiding there. The woodlands are made up of ash, English oak, hazel and grey willow and are home to the dormouse and common lizard. The Blackdown Hills also support an extensive range of butterfly.

There are no major population centres in the hills themselves but nearby are the towns of Wellington , Axminster , Chard , Tiverton , Honiton , Taunton and Yeovil . The Culm Valley Light Railway opened in 1876 but closed to passengers in 1963. It continued to serve the milk depot at Hemyock until its closure in 1975. The M5 motorway skirts around the northern edge of the hills and the old trunk road, the A303, cuts directly through the area as it runs down to the West Country.

Horse riding is well served with a number of routes available within the Blackdown Hills. The hills are also popular for walkers and ramblers.