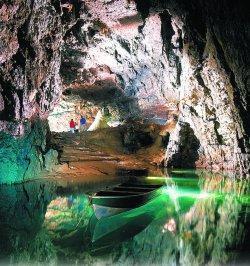 Wookey Hole Caves are a famous tourist attraction located in the village of Wookey , near Wells , in Somerset. The caves are found on the southern edge of the Mendip Hills and were formed by the action of the River Axe on the limestone that makes up the hills. The water enters via underground streams and passes through other caves such as Swildon's Hole and St Cuthbert's Swallet, before emerging at the Wookey Hole Caves.

The waters of the River Axe were used, via a small canal, to power a handmade paper mill that still produced paper until 2008. This is the reputedly the oldest existing mill in Britain. It started making paper circa 1610, although records indicate that a corn grinding mill operated there as early as 1086. The current mill dates from around 1860 and is a Grade II-listed building. Although production of the very fine Wookey Hole hand made paper ceased in 2008, visitors are still able to make paper from cotton there.

The cave is famous for the Witch of Wookey Hole. This is not a person but a roughly human shaped stalagmite in the first chamber of the caves, various supernatural powers have been attributed to this rock. It is said that a witch was turned to stone by a monk from Glastonbury , although there is more than one version of the events leading up to her demise.

The cave and mill were purchased by Madame Tussauds in 1973. They were then combined for the first time as a tourist attraction. The present owner and manager is former circus proprietor Gerry Cottle.

The cave was explored by cave divers during the first successful cave dive in Britain in 1935. Divers from the Cave Diving Group of Great Britain had begun exploring there in the 1930s and in 1935, two Post Office engineers, Graham Balcombe and John Arthur 'Jack' Sheppard ventured 170 ft into the cave. They reached as far as 'Chamber 7' using standard diving dress.

The caves remain at a constant temperature of 11 °C (52 °F) and there is evidence of human habitation dating back around 50,000 years. The low temperature means that the caves are ideal for maturing Cheddar cheese , which originates from just a few miles away in the town of Cheddar .

Although the Mendips are largely an unspoilt and quiet part of England, the Wookey Hole Caves themselves can be very busy in high season