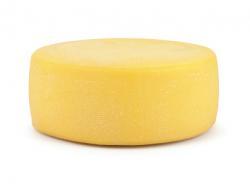 Is there any other cheese so traduced as the cheddar? The path of the British around the world can be traced by identifying places where cheddar is made, provided there are suitable grazing conditions to provide the milk: Canada, Australia, New Zealand, South Africa, and even the United States all produce large quantities, and to add insult to injury most of them sell it back to us.
There is of course worse: it can only be a matter of time before our supermarkets stock cheddar with mango, raisins and chocolate, as they race to supply cheese to people who dont like the taste of cheese. The same people doubtless enjoy Alco-pops.
Real cheddar originated long ago  some claim the Romans brought the method  in the South West of England, notably Somerset , the cheeses made around Cheddar Gorge being so noted for their quality that the name was adopted for product made elsewhere in the region. One explanation for the consistent quality is that cheddar was made cooperatively for centuries, milk pooled and processed by various farmers in a club, the different sources evening out the quality of the milk, the collective financial resources ensuring equipment was reasonable, and the large cheeses made being suitable for lengthy maturing to bring out the best flavours.
Much of what now passes as cheddar is of indifferent quality, but the real thing  look out for West Country Farmhouse Cheddar  is firm, slightly yellow, with a melting quality in the mouth and a good degree of sharpness. The word cheddar can be used by anybody around the world, but West Country Farmhouse Cheddar is restricted to product from Somerset, Dorset , Devon and Cornwall according to EU Protected Designation of Origin Status.
Taste is of course very subjective, but those who can should try Montgomerys Cheddar, made from unpasteurised milk (which means nursing mothers, mothers-to-be and others with health issues need be aware of the fact). Matured for more than 12 months to bring it into the extra-mature category it is complex, with a good bite to it, wrapped in cloth in the proper fashion. To eat Montgomerys cheddar is to be transported back to Dr Johnson s table  already in the 18th century the best cheddar was a gourmets (and gourmands) choice in this country.
The old-fashioned process for cheddar making required coating it in lard to retain moisture; though some now use wax, Dutch-style, and some cheddar is supplied without rind; in addition real rennet is suet, making some products doubly unacceptable for vegetarians. Help is at hand though, as some makers have espoused vegetarian rennet.
Matching drinks with cheddar is open to debate. Bitter has its advocates; robust red wine will not insult it; but a properly made dry cider is hard to beat. And please, if eating real cheddar with biscuits, no butter. Would you put soda water in champagne?