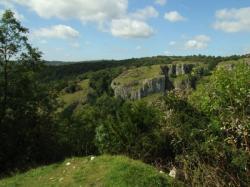 Cheddar Gorge is a natural phenomenon just north of the village of Cheddar in Somerset. It is Britain's largest gorge and it breaks a few other British records with its variety of geological features. The Cheddar Yeo in Gough's Cave is Britain's biggest underground river and the Cheddar Gorge Cliffs, known as the Pinnacles, are Britain's highest inland limestone cliffs. Gough's Cave also boasts the find of Britian's oldest complete skeleton at 9,000 years old. Cheddar Man, as the skeleton is officially known, was excavated in 1903. He is now the Natural History Museum in London , with a replica in the 'Cheddar Man and the Cannibals' museum in Cheddar village.

The Cheddar Caves and Gorge are million year old river beds and have been a major tourist attraction for over 200 years. The Gorge is an important part of a Site of Special Scientific Interest known as the Cheddar Complex. Cheddar Gorge and its caves are also within an Area of Outstanding Natural Beauty and is a candidate for Special Area for Conservation status.

The calcareous grassland and Karst limestone buttresses of the Gorge are very important natural habitats. Horseshoe Bats are just one of the many interesting and often endangered species making their homes there. Peregrin falcons are known to nest on the limestone cliff face and feral soay sheep graze the scrub.

A path of 275 steps built up the side of the gorge is known as Jacob's Ladder, named after the Biblical description of a ladder to the heavens. A cliff top walk from Jacob's Ladder along the crest of the gorge and back to the road gives good views of the gorge. A caving experience is available within Gough's Cave. A watchtower above the site of the caves provides a 360degree view of the entire gorge area and the village below. On a clear day you can see the Mendip Hills , the Somerset Levels and Glastonbury Tor and even all the way to Exmoor . During the summer an open-top bus tour operates along the Gorge for those wanting a great view without expending too much effort.

Cheddar cheese is one of the most famous cheeses in the world. Nowadays it is made everywhere from England to New Zealand but cheddar cheese originally comes from small dairy farms in the Cheddar Gorge region. The Cheddar Gorge Cheese Company in the lower Gorge still make cheddar locally and you can see the traditional Cheddar cheese making process there.