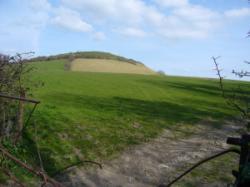 The Polden Hills are situated in Somerset where they run almost parallel with the much larger Mendip Hills . The two ranges are separated by the Somerset Levels , with the Polden Hills being on the southern edge of the levels. The Polden Hills run from Puriton, near Bridgwater and stretch as far east as the town of Street , near Glastonbury .

The western end of the Polden Hills was first bisected by the Bristol and Exeter Railway, which was part of the Great Western Main Line. Now, the M5 motorway also slices through as it runs north south along the western edge of England. A much older route, the Roman road from the port of Combwich to Ilchester , once followed the line of the ridge of the Polden Hills. The later Saxon western extension of the old Roman route fords the River Parrett at a place known as White House Rhyne, on the Pawlett Hams. The White House, once an ancient public house, is know disused and lays in ruins. The modern road, the A39, follows an alternative route arriving at Bridgwater via a causeway from the King's Sedgemoor Drain at Bawdrip.

Although the Polden Hills are a sparsely populated and essentially rural area, there are a number of settlements in nestling in the rolling contours. Lined up from the west to the east through the hills are the villages of Puriton, Bawdrip, Woolavington, Cossington, Stawell, Chilton Polden, Edington, Catcott, Shapwick , Ashcott, Walton, and finally the town of Street

The hills are a valuable natural habitat. Great Breach Wood is part of Butleigh Woods on the Polden Hills, and is owned and managed by the Somerset Wildlife Trust. The wood is just a few miles from Glastonbury and boasts the Wellingtonia or Sequoia trees, so called because they were planted in the 1820s to celebrate the Duke of Wellington . There is also evidence of an old woodland settlement at Great Breach Wood.

The woodlands and slopes of the Polden Hills are important to various species of butterfly, many of them rare. The woodlands are also host to some lovely orchids, which it should be remembered must not be picked!

Although the forest is now carefully managed, it retains many of the characteristics of the ancient forests of Somerset and the South West. Those long lost forests were once inhabited by boars, bears and wolves. Nowadays the visitor is only likely to encounter birds, bees and a wonderful array of plant life.