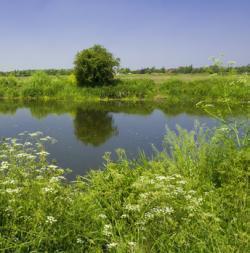 The River Axe flows through Devon, Dorset and Somerset in England, and joins the English Channel at Axmouth in Lyme Bay . The river is home to some boating and yacht clubs at its mouth in Axmouth but the majority is non navigable, due to its shallow depth. There are several nature reserves located on the Axe, consisting of a mixture of saltmarsh and freshwater areas. The river is 22 miles long and is home to a variety of fish including brown trout, roach, and some salmon. The River Axe is fed by the rivers Yarty and Coly, and by a number of small streams.