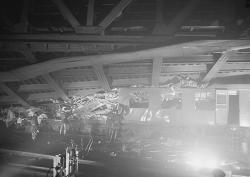 In the terrible league table of British railway disasters the one at Lewisham on December 4 1957 stands in third place, the death-toll only exceeded by the appalling Quintinshill troop train disaster in 1915, and the three-train smash at Harrow and Wealdstone in 1952.
At 6:20pm on a nasty foggy day a train had been halted outside St Johns Station while a signalman sought information about it; to protect that train a red stop signal was set near to it, and yellow warning signals were arranged further down the line. But behind it a train perhaps seeking to make up for lost time missed them: the driver was on the left hand side, the signals on the right. Contrary to good practice he did not get his fireman to watch for signals on the right, though too late that fireman did spot the red. Emergency breaking only reduced its speed to about 35mph: it smashed the last carriage of the stationary train into the next two, the telescoped coaches becoming a scene of carnage. And the derailed engine and tender of the train in motion knocked down a flyover which collapsed on carriages behind them, with further deaths resulting.
In all 90 people died as a result of the accident, and another 173 were injured.
By a strange coincidence Lewisham had been the scene of another fatal rail crash 100 years previously, 11 people killed when again one train ploughed into the rear of another that was stationary.