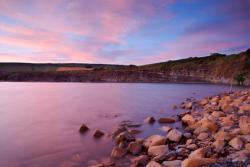 The Jurassic Coast is 95 miles of coastline that stretches from Orcombe Point near Exmouth in East Devon to Old Harry Rocks near Swanage in East Dorset. The Jurassic coast was the second completely natural World Heritage Site to be designated in the United Kingdom when it was chartered in 2001. This honour puts the coast in the company world famous sites such as the Great barrier Reef and the Grand Canyon.

The coastline is famous academically throughout the world because of its unique geological formations and is subject to frequent field studies. Frozen in rock and clay are Triassic, Jurassic and Cretaceous cliffs from the Mesozoic Era. 180 million years of history is recorded in these formations and the site is a magnet for fossil hunters. Mary Anning , a palaeontologist who studied the fossils of the coastline around Lyme Regis , found the first complete Ichthyosaur fossil on the Jurassic Coast. Many other important fossil finds have been made in the area.

In 1985 the Charmouth Heritage Coast Centre was set up by local residents in response to concerns about damage being done to the cliffs by fossil hunters. The Centre provides a large and varied programme of events and activities throughout the year for both the public and schools. A program designed to educate and entertain includes guided fossil hunting expeditions, rock pool walks, plus countryside and marine discovery activities along the Charmouth coastline.

The Jurassic Coast is home to a number of unique land formations. One of the most famous is the iconic natural arch at Durdle Door which continues to draw visitors from all over the world. The coast has many bays and beaches like the quintessential example at Lulworth Cove . The cove also has textbook limestone folding, a feature that is repeated on the Isle of Portland . At Chesil Beach , on the way to Portland, there's a fine example of both a storm and a tombolo beach.

Walking is very popular in the area but during World War II several sections of the Jurassic Coast became property of the then Ministry of War. There was a very large Royal Navy base at Portland Harbour which is now closed. A substantial army base at Bovington is still operating and large areas of land, including the coast between Lulworth Cove, Kimmeridge and also Tyneham ghost village, are still not fully accessible. Despite the military intervention, the entire length of the Jurassic Coast can be walked using the South West Coast Path.