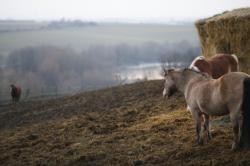 Exmoor National Park is in the south western region of England and covers two counties, Somerset and Devon. The majority of the park is within Somerset, with just 29% being in Devon. The park has a total surface area of 267 square miles. Much of Exmoor is hilly, open moorland but there is also a 34 mile coastline within the park. Exmoor derives its name from the main river running through the region, the River Exe.

Exmoor is an outcrop of sedimentary rocks largely formed in the Devonian and Carboniferous periods. The glaciers that shaped much of Britain didnt make it as far as Exmoor and so left the old land form relatively intact. The highest point is found at Dunkery Beacon where the land rises to 1,704 feet. This also marks the highest point in Somerset.

Exmouth was formerly a Royal Forest but the royal hunting ground was sold off in 1818. It was one of the first British National Parks, and was designated in 1954. Parts of the park have also been declared as Sites of Special Scientific Interest (SSSI) and in 1993 Exmoor was officially declared as an Environmentally Sensitive Area. The coast, with its dramatic rocky headlands, towering cliffs, caves, ravines and waterfalls, was recognised as a Heritage Coastline in 1991. The 630 mile South West Coast Path includes all of Exmoors coastline.

The Exmoor Coastal Heaths Site of Special Scientific Interest (SSSI) is one of three areas with SSSI designation. The North Exmoor SSSI covers 29,666 acres and includes the Dunkery Beacon and the Holnicote and Horner Water Nature Conservation Review sites, and the Chains Geological Conservation Review site. North Exmoor SSSI is important for its breeding bird communities and its large population of the nationally rare heath fritillary butterfly. The areas exceptional woodland lichen flora and its deep peat also provide excellent reasons for its protected status. The South Exmoor SSSI is a smaller site at covering 7,741 acre. The River Barle and its tributaries are inside this SSSI and are a valuable habitat for  submerged plants such as the alternate water-milfoil. There are also remaining patches of semi-natural woodland within the site, including some which are designated as ancient woodland. Sessile oak is the dominant species of tree in this SSSI. Ground flora includes bracken, bilberry and a variety of mosses.

The heaths of Exmoor are home to strong breeding populations of birds, including whinchat and stonechat. The wheatear likes to be near stone boundary walls and other stony places. The grasshopper warbler likes to breed in the scrub and tall heath habitats provided on Exmoor. Trees on the moorland edges provide ideal nesting sites for redpoll, common buzzard and the raven.

Settlement is relatively sparse within Exmoor, with 40% of the population living in the largest settlements of Porlock , Dulverton , Lynton and Lynmouth . The rest of the Exmoor population is dispersed across the region in the numerous small villages and hamlets.