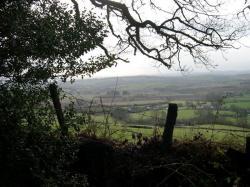 The Quantock Hills are in Somerset and lie to the west of Bridgwater . The hills run up from their southern end at the Vale of Taunton Deane , they follow a line running to the north-west. The range ends at East Quantoxhead and West Quantoxhead on the coast at Bridgwater Bay, in the Bristol Channel . The hills form the western border of Sedgemoor and the Somerset Levels .

The highest point on the Quantock Hills is Wills Neck, at 1,261 feet. From the top of the hills on a clear day it is possible to see Wales as far as the Gower peninsula to the north and the Blackdown Hills to the south. Glastonbury Tor and the Mendips are visible to the east, the Brendon Hills and Exmoor lie to the west.

In 1970 an area of just over 6,000 acres of the Quantocks was designated as a Biological Site of Special Scientific Interest. The hills are also officially designated as the Quantock Hills Area of Outstanding Natural Beauty. The Quantock Hills contain a rich variety of habitats. High hilltops are covered in heath of gorse, heather and bracken. The deep, stream-cut combes of the north-east contain extensive oak woods, with small areas of bog rich in wild flowers nestling above them. The steep slopes on the western Quantocks feature a tapestry of woods, pasture and parkland.

This rich, natural habitat is a favourite with walkers. The Coleridge Way crosses the Quantocks on its way from Nether Stowey to Porlock . The Quantock Greenway follows a figure of eight centred on Triscombe. The 19 miles northern section loops through Crowcombe and Holford. The southern loop runs for 18 miles via Broomfield. The path travels through picturesque deciduous and coniferous woodland, private parkland, grazed pasture and farmland.

The charming villages of the Quantocks are a draw to visitors and most of the hamlets feature ancient churches. The Norman church of St Giles in Thurloxton has sections dating back to the 14th century. The Church of St Mary in Kingston St Mary dates from the 13th century, although the tower is from the early 16th century.

The historic country house of Hestercombe House in Cheddon Fitzpaine is visited by around 70,000 people per year. Hestercombe House contains a designated biological Site of Special Scientific Interest and has been used for roosting by the very rare Lesser Horseshoe Bats. It has also been designated as a Special Area of Conservation.

Another big draw in the area is the West Somerset Railway (WSR) . The historic railway runs along the edge of the Quantock Hills from Bishops Lydeard to Watchet before it turns along the coast for the run to Minehead .