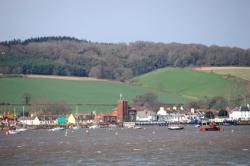 The River Exe is a major river in England that rises on Exmoor in Somerset and, after a journey of about 50 miles, joins the English Channel downstream from Exeter in Devon at the Exe Estuary. The River Exe has its source near the village of Simonsbath , which itself is close to the Bristol Channel coast. But, instead of heading straight for that coastline, the river is forced due south. This means that the greater part of its length lies in Devon. Exeter has historically marked the lowest crossing point of the river but a viaduct was built to carry the M5 motorway over the river, just over a mile south of the city centre. The river is tidal as far as Countess Wear where it is limited by the weir. This was originally commissioned by the Countess of Devon in the 13th century when she wanted to prevent ships navigating the river to and from Exeter. The Exeter Canal was cut around this weir in 1566 to enable ships to reach Exeter Quay again, making it Britain's oldest ship canal. The Exe Estuary forms a vast body of water that is extremely popular for sports such as sailing, windsurfing and water skiing.