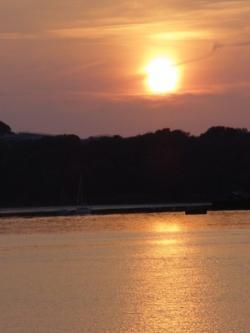 The Tamar is a river that flows through South West England. The river forms a natural division along most of the border between Devon on the east bank and Cornwall to the west. The ancient name is thought to derive from a prehistoric word apparently meaning dark flowing and it shares this origin with, among other UK rivers, the Thames . The Tamar's springs only 4 miles from the north Cornish coast. But instead of taking a short route to the sea it is forced southward by the local geology. The Tamar flows into the Hamoaze at the point where it joins with the River Lynher, just upstream of Plymouth Sound. The Tamars tributaries include the rivers Inny, Ottery, Kensey and Lynher (or St Germans River) from Cornwall, while the Deer and Tavy flow into the Tamar from Devon. The Tamar Valley is well known for both its beauty and history. Many would argue that it possesses some of the finest scenery in the West Country. The Estuary is a valuable habitat for wildlife, including the avocet and little egret. The valley of the river Tamar and two of its tributaries, the Tavy and Lynher, form a designated as an Area of Outstanding Natural Beauty.