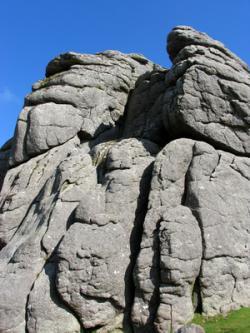 Rough Tor is a hill and tor located on Cornwalls Bodmin Moor , in England, around three miles from Camelford . Standing at 1313 feet above sea level it is the second highest point in the county of Cornwall. The highest point in Cornwall, Brown Willy, lies just a mile northwest of Rough Tor. The De Lank River rises nearby and flows between the two hills. Rough Tor is a popular destination for walkers and tourists, with easy access provided by a car park that lies just one mile from the tors summit. In 2007 the television programme Time Team excavated a cairn and the site of a Bronze Age village on the slopes of Rough Tor.