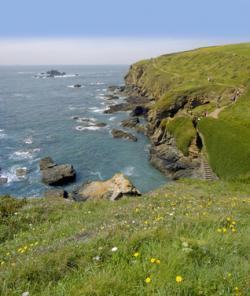 The Lizard is a peninsula found in the extreme south-western tip of England, in the county of Cornwall. Lizard Point marks the most southerly point of mainland Great Britain and is the site of the world famous Lands End .

The Lizard Peninsula has been designated as an Area of Outstanding Natural Beauty (ANOB) in recognition of its important ecological significance. It is home to no less than 15 of Britains rarest plants. It is also home to Britains only poisonous snake, the adder.

Despite being formed of a rock called serpentinite, the areas name is not derived from any reptile. It is in fact most likely a derivative of the Cornish name Lys Ardh, which means high court.

The Lizard has long presented a significant danger to shipping. The treacherous Man o War Rocks just offshore have claimed many unfortunate vessels. This is in no small part due to the very heavy seas and storms so often thrown up by the Atlantic Ocean there. A lighthouse, Lizard Lighthouse, has stood at Lizard Point since the original one was first established there in 1751.

Fishing and the sea have long been the backbone of the regions economy, although nowadays this is fading in importance and has been largely supplanted by tourism.