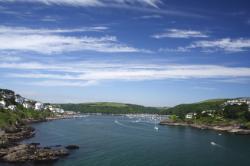 The River Fowey is a river that flows through the county of in Cornwall in the south western region of England. The rivers source is found about one mile to the north-west of Brown Willy on Bodmin Moor . From there the river passes Lanhydrock House , Restormel Castle and Lostwithiel . The river then broadens at Milltown and flows into the English Channel at Fowey.

The River Fowey is navigable by larger craft only along the last seven miles of its course. There are several crossing over the river, including a ferry that runs between Fowey and Bodinnick, with the first road crossing going back upstream being at Lostwithiel. The River Fowey is fed by seven tributaries, the largest of which is the
River Lerryn.

Between Doublebois and Bodmin Parkway railway station the Fowey runs through the Glynn Valley which gets its name from Glynn House at Cardinham. The valley carries the A38 trunk road and the railway line which was built by the Cornwall Railway in 1859. The railway line is carried on eight magnificent stone viaducts here.

The rivers estuary forms a natural harbour which is a popular with yachtsmen. Fowey itself is a busy port, with ships of all sizes using the port despite having to negotiate the bends of the estuary. At the other end of the river, high on Bodmin Moor and away from the busy towns and coast, the river flows through a rugged landscape where anglers have fished for salmon and trout for centuries.