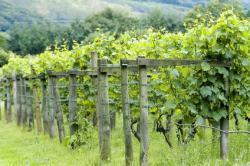 The Camel Valley is found in the county of Cornwall, England. It lies
on the northern side of the country, on the edge of Bodmin Moor. The
town of Bodmin itself is within the valley. The Camel Valley is an
important habitats for otters. The valley was formed by the River
Camel which flows through it. Five Sites of Special Scientific
Interest (SSSIs) can be found along the length of the River Camel with
the River Camel Valley and Tributaries SSSI covering much of the Camel
Valley between Egloshayle and Blisland. The SSSI extends right up to
the source of the river on the Hendraburnick Down. The River Camel is
designated by the Joint Nature Conservation Committee as a Special
Area of Conservation as being of European importance for the Otter and
the Bullhead. The area is sparsely populated and an abundant natural
habitat. Several nature reserves are hosted in the valley, such as the
Cornwall Wildlife Trusts Hawke's Wood reserve. This reserve is
situated on the southern side of the Camel Valley between Wadebridge
and Dunmere. The reserve features a mature woodland of predominantly
Sessile Oak that is situated in an abandoned quarry. The tributaries
of the River Camel also occupy the valley, these are the River
Ruthern, De Lank River, River Allen.