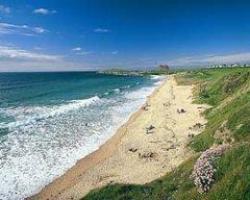 Cape Cornwall is a small headland situated in English county of Cornwall, four miles north of Land's End . The small promontory lies near the old mining town of St Just and is known in the local Cornish language as Pen Kernow. The hill which forms the cape is marked by a sentinel. Cape Cornwall marks the point at which Atlantic current divides. One stream heads south-southeast along the English Channel, while the other veers north to feed into the Bristol Channel and Irish Sea. Two rocks, the Brisons, stand offshore around one mile to the southwest acting like guardians of the peninsula. Apart from Lands End, Cape Cornwall is the most south-westerly point in mainland England and is mainly owned by the National Trust. Cape Cornwall is one of two places in the United kingdom that is prefixed with the name Cape, the only other being Cape Wrath in Scotland. There is a beach at Cape Cornwall known as Priest Cove, its very rocky but it features a small bathing pool and is very popular with swimmers and tourists. The fishing huts and boats still remain and, along with the the slipway, they help lend a traditional Cornish atmosphere to the scene.