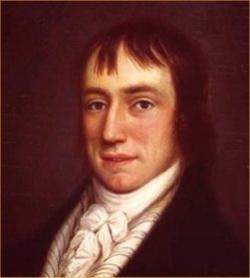 Born in Cockermouth, Cumbria
Born on 7th of April 1770
Died in Ambleside, Cumbria
Died on 23rd of April 1850

William Wordsworth was born on April 7th 1770, and died April 23rd 1850. Along with his friend, Samuel Taylor Coleridge, Wordsworth helped launch the Romantic Age in English literature with the publication in 1798 of their joint publication, 'Lyrical Ballads'. He was born in Cockermouth, Cumbria, the second of five children to John Wordsworth, a law agent, and his wife Ann. Wordsworth lost his mother when he was 8 years old and his father sent him to Hawkshead Grammar School. His father died when Wordsworth was 13 and he became separated from his much adored sister, Dorothy. He later attended St. John's College, Cambridge. He was a great hiker and spent the summer of 1788 on a walking tour of the Lake District, an area he would became synonymous with. This was followed by similar tours of France, Switzerland, Germany and Wales. On his trip to France, he had an affair with Annette Vallon, with whom he had a child, Caroline, in 1792. He had to return to England the following year when he ran out of money, and at the onset of the Anglo-French War, became separated from Annette and Caroline for some 9 years. 1793 saw Wordsworth's first published poetry collections, 'An Evening Walk' and 'Descriptive Sketches'. He was reunited with his sister Dorothy in 1794 who became his companion, moral support and housekeeper. The next year he met Samuel Taylor Coleridge in Somerset and all three grew close, with Wordsworth and Dorothy settling in the area, resulting in the publication of 'Lyrical Ballads'. They travelled to Germany together in 1798 which caused Wordsworth to become homesick and start work on his autobiographic piece, 'The Prelude', plus a number of other poems titled, 'the Lucy poems'. He and Dorothy relocated to his beloved Lake District, near Grasmere, upon their return, along with fellow poets Robert Southey and Coleridge. The three became known as the "Lake Poets". In 1802, the Peace of Amiens allowed Wordsworth and his sister to visit Annette and Caroline in France where a settlement was agreed upon regarding Wordsworth's obligations to his daughter. On his return from France, he inherited money and decided to marry a childhood friend, Mary Hutchinson, in 1802. Dorothy continued to live with the couple, and the following year Mary gave birth to the first of their 5 children. Wordsworth then became depressed, plagued by the death of his brother John in 1805, alienation from Coleridge in 1810 and the death of 2 of his children in 1812. However, his literary powers peaked with the publication in 1807 of 'Poems in Two Volumes' and his reputation began to grow. In 1813 he was appointed Distributor of Stamps to Westmorland making him and his family financially secure. They then moved to Rydal Mount, between Grasmere and Rydal Water, where he spent the rest of his life. He then began working on a long form, mammoth three-part philosophical poem containing 'views of man, nature and society based on the opinions of a poet living in retirement'. The second section, 'The Excursion' and the first part of the first section, 'The Recluse' were published in 1814, but during his lifetime he refused to allow the third part, 'The Prelude' to be published, and he spent much of his later life revising it. His widow published it in 1850, not long after his death. Finally reconciled with Coleridge, the two poets toured the Rhineland in 1828 and Wordsworth received honorary doctorates from Durham and Oxford Universities in 1838 and 1839. Wordsworth was named Poet Laureate after his friend Robert Southey died in 1843. He ceased writing poetry in 1847 when his daughter Dora died. He died in 1850 and was buried at St. Oswald's Church, Grasmere.

Contributors: Do you have a site related to William Wordsworth?
Supply some content for this page and we will gladly add a link to your site. Email here.