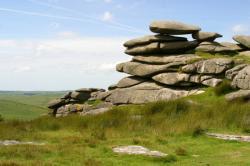 Bodmin Moor is an enigmatic granite moorland that lies between Launceston and Bodmin from east to west, and between Camelford and Liskeard going north to south. Brown Willy marks the highest point on the moor and in Cornwall at 1368 ft. Bodmin Moor marks the gateway to the ancient Duchy of Cornwall.

Designated an Area of Outstanding Natural Beauty, Bodmin Moor provides a haven for birds and wildlife. The moor is a favourite place for walkers and ramblers and there are many paths and walks on the moor. Cardinham Woods has four way-marked trails and miles of other tracks and paths, all weaving their way through 650 acres of scenic woodland,

Bodmin Moor is host to a number of attractions. There are many natural features such as the popular Carnglaze Caverns . The caverns are three underground caves set in six and a half acres of woodland at St. Neot, near Liskeard. Man made attractions such as the Trethorne Leisure Park also draw plenty of visitors. The park has a large outside play area as well as excellent undercover activities such as the 'Jolly Rogers' ball blaster, the dropslide, ball pools, the assault course and the giant astra slide. There are even ponies to ride and lambs to feed during the 'In touch with animals' sessions.

Steam enthusiasts are drawn to the Bodmin & Wenford Railway . The Railway has been staged as a typical English branch line from the 1950's. Great Western steam tank engines are the main locomotives in use but early diesel traction is also operating. The main station is Bodmin General, complete with engine sheds, a souvenir shop and a refreshment room in the restored station buildings.

Bodmin Plant & Herb Nursery on the A389 near the town of Bodmin itself is a popular destination. The nursery specialises in herbs and herbaceous perennials. There is a wide range of plants including shrubs, grasses, climbers, alpine plants and hanging baskets on show there.

Bodmin Moor is famous for the granite tors that litter the moorland. These granite outcrops were left by the ice age and are a testament to when the weather was even more volatile on the moor than it is today. Snow and heavy rain can still make Bodmin Moor very inhospitable for those who haven't come well prepared.

Culture and entertainment are on hand to pass the time whatever the weather outside at venues such as Sterts Theatre in Upton Cross near Liskeard. The theatre promotes drama, music, dance, painting, photography, sculpture and the performing arts within an outdoor amphitheatre, indoor studio, gallery and grounds throughout the year.