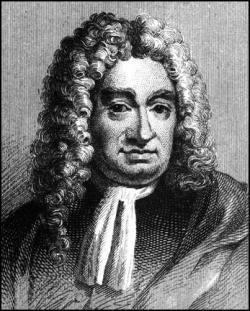 'Greenwich possesses the best a'... More

Daniel Defoe (born simply Foe, he added the aristocratic prefix De for effect later in life) lived one of the fullest lives of any man of letters in history, the antithesis of the garret-bound writer or gentleman scholar. He is remarkable too for the enormous productivity of his later years, his great (and highly enjoyable) contributions to the English novel written just before and well into his sixties.
Defoes was born somewhere between 1659 and 1661, probably in Stoke Newington. His father was a tallow chandler, but Defoe escaped that world via lengthy travels in Europe, then adventures (some dishonest) in various commercial fields  wine-selling; running a brickworks; as a hosiery merchant. He was imprisoned for debts at least once in his life.
Some activities provided cover for his work as a spy, for the Tories, then Whigs, then back to the Tories again. As a Dissenter he joined the Monmouth Rebellion, lucky to receive a pardon for his part in it, and then supported William III when he invaded. He began his satirical career proper with The Shortest Way with the Dissenters in 1702, for which he was fined, pilloried and imprisoned. In 1704 he founded The Review, a twice weekly paper written wholly by him. Many regard Defoe as the father of British journalism for this, which began the tradition of the lead article, and used gossip for political purpose.
With a life filled with incident as material Defoe turned to novel writing when nearly 60: his first, Robinson Crusoe (1720) still a cornerstone of the genre; he also produced Moll Flanders in 1722, and the fascinating A Journal of the Plague Years the same year. Defoe often centred his plots on the idea of eventual redemption, perhaps after his career as a double agent and unprincipled trader hoping for a similar ending in his life.
In all Defoe wrote more than 500 books, pamphlets and articles, constantly in need of money. He used irony liberally, and it is ironical that a man with his background should also have written religious books on behaviour, manuals for the tradesman, and economic treatises. He was perhaps better qualified to write his great travelogue Tour through the Whole Island of Great Britain. Defoe died on April 24 1731 in London, it is thought in hiding from those wanting to return him to debtors prison.

Contributors: Do you have a site related to Daniel Defoe?
Supply some content for this page and we will gladly add a link to your site. Email here.