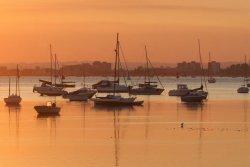 Abbotsbury
Did you know the oldest farmed herd or flock in the country is almost certainly one at Abbotsbury in Dorset  and the creatures in question are swans? There are records showing the existence of a swannery here in 1393, but as the Abbey it belonged to was established in 1040 it is likely to have started nearer that date. Descendents of Sir Giles Strangways, who bought the Abbey at the Dissolution, still run it. For the monks the swans were food; now they are a tourist attraction.
Bournemouth
Did you know that in Bournemouth on 12th July 1910 Rolls Royce co-founder Charles Rolls became the first British man to be killed in an aircraft crash? He was a true aviation pioneer, having crossed the channel by balloon in 1906, and made the first two-way crossing of those same waters in an airplane only a month before his fatal crash . Rolls made more than 200 flights in his Wright Flyer, made under license by Short Bros. Perhaps that usage was the cause of its tail breaking off with deadly consequences for the pilot.
Did you know that Percy Shelleys heart is interred in St Peters Church , Bournemouth? Its arrival there was rather late: Percy Shelley drowned in 1822 while boating off Livorno; his body washed ashore and was cremated on the beach. His friend Edward Trelawny somehow grabbed the heart from the flames and presented it to Mary Shelley who kept it with her thereafter. It was only when his son, Percy Florence Shelley, died in 1889 that he and his fathers heart were both placed in the family vault.
Dorchester
Did you know that Maiden Castle, the ancient earthwork fortress near Dorchester, was occupied from around 3500BC until the arrival of the Romans in 43AD? For most of that time the site was apparently a camp, only fortified in about 350BC. The defenders meant business: excavations revealed a store of about 20,000 stones (from Chesil Beach) for use in slings. But they were outgunned: one skeleton was found with a Roman catapult bolt in its spine.
East Lulworth
Did you know that Lulworth is where the first post-Reformation Catholic church for which royal permission (George IIIs) was granted was built? The un-churchy appearance of The Rotunda was deliberate  one of the conditions for its construction was that it should not resemble a church.
Lyme Regis
Did you know that the first fossil shop in Britain was opened in Lyme Regis in 1826? It was run by Mary Anning, whose family supplemented their meagre income by digging fossils from the cliffs to sell as curios to holidaymakers. Mary became an expert in the field, consulted by academics and even visited by King Frederick Augustus II of Saxony: but as a woman she was not eligible to join the Geological Society.
Poole
Did you know that Poole Harbour is the largest natural harbour in Britain? It was formed at the end of the last ice age when what was a valley was filled by rising seas.
Did you know that what can be regarded as the worlds earliest radio station was set up by Marconi at the Haven Hotel , Sandbanks in Poole? He built a transmitter there in 1899.
Did you know that Sandbanks in Poole is the most expensive place to live in Europe? Even during the financial crisis one plot was advertised in 2009 for roughly £10,000 per square metre.
Puddletown
Did you know that Puddletown was Hardys model for Weatherbury in Far from the Madding Crowd (is it wrong to want the death sentence for anyone writing ...Maddening Crowd?)? Bathshebas farmhouse is strongly linked with Waterston Manor, a late 16th century structure though built on ground occupied by a house since at least Saxon times.
Weymouth
Did you know that many of the questions for the original 'trivial pursuit' game were researched in the public library in Weymouth.
Did you know that two ships  one of them from Bristol - that docked at Weymouth in June 1348 are believed to have brought the Black Death to Britain? It was Melcombe at the edge of Weymouth that first showed signs of the epidemic, believed to have been carried by a sailor recently in Gascony. By the time the first wave of the plague died down (it didnt die out) about half the population of Britain had succumbed to the disease.