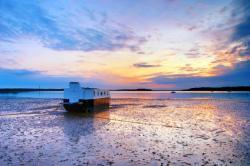 The harbour was formed after the end of the last Ice Age when the river that formerly flowed through a valley there was flooded with melt-water. Several rivers now feed the harbour, the largest of them being the River Frome.

Although the harbour enjoys an extensive surface area, it is in fact very shallow with an array of sand banks and saltwater flats. A single deep water channel is dredged to allow for the safe passage of shipping. The harbour is surrounded by freshwater marshes and reed beds, and these provide an ideal breeding ground for an important array of birds. The harbour bed itself is an equally vital habitat for sealife, much of which is now rare or even threatened in Britain. This valuable sea life includes tube worms, sea sponges, sea mats and sea squirts.