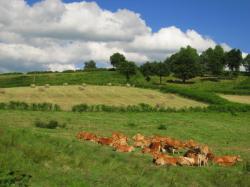 Blackmore Vale, a wide valley acting as a floodplain for the River Stour , is a large expanse of lush pasture set primarily in North Dorset in England. Famous for its variety of farming and market towns, Marnhull in particular is well known for being the inspiration for Thomas Hardy 's novel, Tess of the D'Urbervilles. Another prominent local writer and author of the Hitchhikers Guide to the Galaxy , Douglas Adams, also resided here. The landscape itself, bands of alternating clay and limestone soils, is mainly used for the dairy farming. This gave rise to the busiest livestock market in Britain until it's closure in 1998.