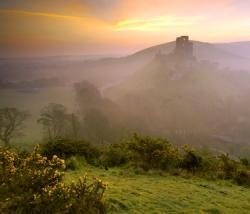 The Purbeck Hills are a ridge formed of Cretaceous chalk that runs from the Dorset Downs to west of Dorchester and across the Isle of Purbeck. The hills belong to the southern England Chalk Formation, which also includes Salisbury Plain and the South Downs . Long ago this formation would have been continuous up to, and including, the Isle of Wight to the east. The Isle of Purbeck is not a properly formed island, it is a peninsula.

The strategic importance of the ridge has long been recognised with its commanding height and proximity to Poole Harbour and the south coast. Iron Age , Roman and Saxon archaeological sites abound, including Nine Barrow Down. At Corfe Castle the hills are broken twice and a steep round hill has been left where once there was a medieval castle. The castle once guarded the only easy route through the hills, but it was destroyed in the 17th century during the English Civil War .

There are areas of the ridge round the village of Tyneham, near Lulworth, that were closed to the public as they were in use by the army as a firing range. This protected the land from any damage from farming and development. These areas are now natural reserves. Ballard Down on the eastern end of the ridge is a National Trust nature reserve that's very important for its calcareous grassland habitat. The range of chalk stacks along the eastern cliff, including the famous Old Harry , are part of Ballard Down.

The Purbeck area is very popular with walkers and many paths exist there. These allow a variety of walks from coastal treks to ambles through the charming villages with their cottages made from the local Purbeck-stone. The southern hills were heavily quarried and this now helps to create a unique character and to attract a rich variety of wildlife. Many of the old quarry sites can be accessed along the cliff, the most notable of which are Dancing Ledge, Seacombe and Windspit. Many rare species of flower, animal and bird are there to be seen by those who walk along the hills and the world renowned Jurassic Coast . On a clear day the views from the south hills take in Southampton and the Isle of Wight to the east, and Weymouth and Portland to the west.