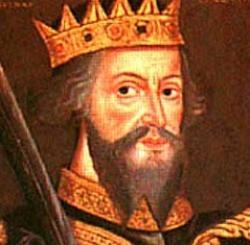 After the decisive victory at Hastings on October 14 , and thanks to Harold having killed Hardrada and his own brother and rival to the throne Tostig at Stamford Bridge in September, only one possible rival lay in Williams path: the child Edgar the Atheling.

There was sporadic resistance to the advance of the Normans from the coast, London for a brief time preventing his armys entry. But this could not last long. The Normans put outlying parts of London, on the Surrey bank of the Thames , to the torch, a clear signal of their violent reaction to those who would stand against them. The Witan had no choice but to accept the new king.

Edgar and his leading supporters submitted to William at Berkhampstead, and crossed into London at Wallingford. The way was clear for William, who chose to be crowned on Christmas Day, emphasizing his right to the throne while his rival Harold was dead - Harold who had reneged on his solemn promise to support the Norman, a promise moreover made over sacred relics.

One man continued not to recognize the king: the Archbishop of Canterbury , Stigand, steadfastly refused to officiate at the ceremony, and was replaced by the Archbishop of York , so the continuity so important to medieval rulers was to some extent, and very publicly, broken.

At the ceremony, at the moment when the newly crowned king was acclaimed, his bodyguard knights outside Westminster Abbey feared the king had been attacked, and that the cries were the signals of violence within the building. With the brutality that would mark the Norman rule for decades to come, they slaughtered all the bystanders they could before the area cleared, and set several buildings alight, their bloodletting only stopped by William appearing alive and well, and dressed in his ceremonial garb, at the door to the Abbey.