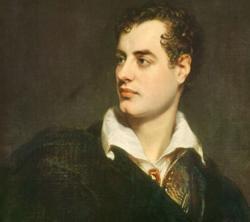 'Those who will not reason, are'... More

Mad, bad and dangerous to know, according to one of his lovers, Lady Caroline Lamb, Lord George Gordon Byrons story is one of excess, passion, and irreverence.
Byrons early life was tough: his father, having spent Byrons mothers money, left her, so they moved from London to Aberdeen, where he attended the Grammar School. Aged 10 he inherited his title and Newstead Abbey in Nottinghamshire, enabling him to attend Harrow (where he played in and was probably an organiser of the first Eton-Harrow cricket match at Lords) before becoming an undergraduate at Trinity College Cambridge.
At Trinity he notoriously reacted to a ban on dogs by keeping a bear. His reaction to criticism of his poetry was equally extreme, satirising critics mercilessly.
In 1809 he took a grand tour in the Eastern Mediterranean, and wrote most of what became Childe Harolds Pilgrimage, his master work. Don Juan is equally revered within a prodigious poetic output.
Perhaps because of lifelong lameness he was vain (curling his hair) and obsessed with building his image through deeds and writings as a dark and brooding figure above common rules.
Byron had a succession of lovers, female and male, probably including his half-sister Augusta Leigh. He had a daughter by his wife of one year Annabella, a second illegitimate daughter, and possibly a third by Augusta.
Rumours of his immoral (and dangerously illegal) exploits forced him to quit England in 1816, never to return. He lived in Switzerland and Venice, and supported the Italian revolutionaries. His support for Armenian causes led the Greeks to seek his support against Ottoman oppression. Byron financed ships and artillery for them, conveniently for his legend dying of fever on campaign in the swamps of Messolonghi aged just 36.

Contributors: Do you have a site related to Lord Byron?
Supply some content for this page and we will gladly add a link to your site. Email here.