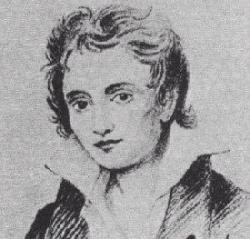 Percy Bysshe Shelley was born on August 4th, 1792 and died July 8th, 1822. He was one of the major English Romantic poets, famous for his controversial opinions, radical politics and association with contemporaries such as John Keats and Lord Byron. He was also married to Frankenstein novelist Mary Shelley. Percy Shelley grew up in Horsham, Sussex, son of a Whig MP and his Sussex landowner wife. He went to Eton College and University College, Oxford where he was expelled from in March 1811 after publishing a pamphlet entitled, The Necessity of Atheism. Shortly after his expulsion, Shelley travelled to Scotland with a 16-year old school girl called Harriet Westbrook. They were married and relocated to the Lake District, but Shelley soon began to tire of his marriage and child and began visiting political philosopher William Godwin in London where he met Godwin's daughter, Mary Wollstonecraft Godwin. Mary and Percy ran away together, also taking along Mary's stepsister Claire Clairmont. The three sailed to Europe and settled in Switzerland. They had to return to London, destitute, after six weeks and it was there in 1815 that Shelley wrote, 'Alastor, or The Spirit of Solitude'. In the summer of 1816 the Shelleys returned to Switzerland where they were introduced to Lord Byron by Mary's stepsister Claire. Percy was greatly invigorated by his friendship with Byron and produced his 'Hymn to Intellectual Beauty' and the poem, 'Mont Blanc' whilst living as Byron's neighbour on the shores of Lake Geneva. In 1816, Shelley's estranged wife Harriet drowned herself in the Serpentine in Hyde Park. Percy and Mary were married shortly afterwards and moved to the village of Marlow, Buckinghamshire where they entered the literary circle that surrounded writer and editor, Leigh Hunt, who introduced Shelley to John Keats. The Shelleys then travelled to Italy, visiting Byron in Venice and moving around various cities over a period of years during which Shelley wrote 'Prometheus Unbound' and 'The Cenci'. He also produced his best known political poems and the political essay, 'The Philosophical View of Reform' whilst there. Tragedy struck the Shelleys in Italy when their son and daughter died in 1818 and 1819. Mary and Percy continued to move around and Percy invited Leigh Hunt to join him in Italy with the idea of starting a political journal called The Liberal, alongside Byron, as a counterblast to conservative periodicals of the time. Shortly before his 30th birthday, Shelley drowned while sailing back from setting up The Liberal. Many believe his death was not accidental as he was quite unpopular with the British establishment. Shelley's body washed ashore and in keeping with quarantine regulations, had to be cremated on the beach near Viareggio. The harrowing funeral scene involved Shelley's friend Edward Trelawny snatching Shelley's heart out from his body on the funeral pyre. Mary Shelley kept it for the rest of her life and it was interred next to her grave.

Contributors: Do you have a site related to Percy Bysshe Shelley?
Supply some content for this page and we will gladly add a link to your site. Email here.