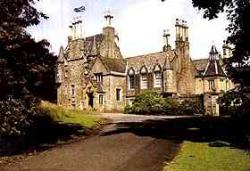 Located only a little over three miles from the centre of Edinburgh, Lauriston Castle overlooks the Firth of Forth and enjoys a spectacular view across the Firth to the Fife coast and to the mountains of Perthshire beyond.

The castle retains its historic policy, or enclosed park, which was formed during the mid-nineteenth century from a portion of the original estate (first recorded in the Exchequer Rolls of 1290). The historic garden was also laid out at this time.

The oldest part of the castle, a Scottish fortified tower house, dates from the 1590s, and was built for Sir Archibald Napier, father of the famous mathematician and inventor of Logarithms, John Napier. Over the following centures the castle changed hands on several occasions and was the home of a number of notable Scots, including John Law. He was a remarkable character and brilliant financier, who rose to power in France under the patronage of the Duc D'Orleans, Regent of the infant Louis XV, becoming controller general of the finances of France.

Between 1824-27 the castle was extended and modernised for the then owner, Thomas Allen, by the well-known architect William Burn. The additions were in the fashionable 'Jacobethan' style.

In 1902 the castle was purchased for the last time, by William Robert Reid, proprietor of Morison & Company, an important Edinburgh Cabinetmaking business.

In his lifetime Reid enjoyed widespread acclaim for the sensitive restoration of old houses and under his direction Morison & Company renovated the castle. It was transformed into one of Scotland's most fascinating Edwardian properties.

In 1926 Reid's widow, Margaret, in fulfilment of their joint intentions, left the castle in Trust, to the Nation. It was their express wish that the castle would be left 'as at the death of the survivor of us' and today's visitor experiences an interior still redolent of the leisured and wealthy middle class way of life typical of the years before the Great War.

From July 2002 a major new attraction opens to visitors to Lauriston Castle. The Edinburgh/Kyoto Friendship Garden is one of the largest Japanese gardens created in the United Kingdom in the course of the last 100 years.