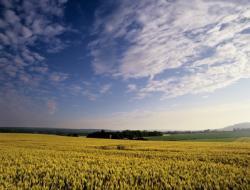 Sandwiched between the North Downs and South Downs , only a few miles from London , lies The Weald. It consists of two main areas made up of the sandstone 'High Weald' in the centre and the clay 'Low Weald' on the periphery. The name is derived from the Saxon word meaning 'woodland' or 'forest'.

Despite lying in one of England's most densely populated areas, the Weald still lives up to the ancient meaning of its name. Most of the woodland is now found in the Low Weald area with 23% of it still regarded as woodland. Much of the High Weald is now designated as the High Weald Area of Outstanding Natural Beauty. It is also home to some important acid habitats such as heath-land. Ashdown Forest and nearby Thursley boast the largest remaining areas heath. Wild boar was once common here until the 17 century. Recently, boar has begun to re-established itself in the area after escaping from farms.

Some parts of the Weald have given way to urban development. The area of Crawley and Horley is now a sprawling settlement that hosts the busy Gatwick Airport . However, there are still no other really large towns on the Low Weald, although Ashford and Reigate sit on the northern edge of The Weald.

The Weald is a magnet for cyclists and ramblers, there are several Long distance footpaths that pass across it. However, the area offers visitors much more than just country paths.

The Weald and Downland Open Air Museum , near Singleton in Sussex, is home to a fascinating collection of nearly 50 historic buildings dating from the 13th to the 19th century. At Marle there is an extensive and peaceful Wealden garden rich in a variety of native flora and fauna. Within the yew hedged kitchen garden there is a magnificent restored Victorian glasshouse which holds an exotic display of orchids.

One of the world's most celebrated gardens, at Sissinghurst , stands in the ruins of a large Elizabethan house set in unspoilt Wealden countryside. Bedgebury Forest offers the visitor excellent walking, cycling, mountain biking, horse riding, adventure play and orienteering. A multi-functional Visitor Centre has been established there, as well as a purpose built cycle track. Bedgebury National Pinetum claims to be host to the world's finest collection of conifers.

Fly-fishing, sailing, canoeing, rowing, windsurfing and cycle hire are all available at the South East's largest body of water which is found at Bewl . Finchcocks is a Grade 1, 18th century manor set in a beautiful garden with extensive views of the surrounding parkland and hop-gardens. It is also is a music centre of international repute and many events take place there. Lamberhurst Vineyard offers you the chance to learn about English wines in a beautiful Wealden setting.

The National Trust gardens at Scotney offer a stunning picturesque backdrop for a fairy tale 14th century castle. The castle is complete with a moat but is now in ruins. The historic spa town of Royal Tunbridge Wells is perhaps the most picturesque of all the Wealden towns. This sophisticated urban centre was a playground for Georgian aristocracy and a favourite destination for the Royal Family. It still retains much of its period architecture and charm. Tunbridge Wells offers the visitor a fine selection of restaurants , cafes, bars and of course shops .