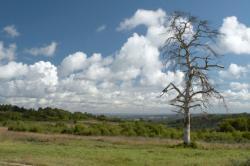 Ashdown Forest covers 6,500 acres of the county of East Sussex. Once part of the great ancient forest of Anderida, Ashdown Forest survives as areas of open heathland mixed together with pine, birch and oak woodland. It is within the High Weald Area of Outstanding Natural Beauty and, despite being in one of Englands busiest and most populous regions, it is a haven of rural idyl. Perhaps its the areas rural charm that led A. A. Milne to set his famous  Winnie the Pooh ' stories there.

The area is held in such high esteem and loved by so many that there has been debate as to whether it should become a national park. The importance of Ashdown Forest to wildlife is recognised by its designation as a Special Protection Area and a Site of Special Scientific Interest (SSSI).

It is no surprise that Ashdown Forest is a haven for wildlife, however it is a little out of the ordinary to see a red-necked wallaby hopping around an English woodland! But, probably a result of animals escaping from captivity, during the 1940s these marsupials were believed to be fully naturalised and breeding in Ashdown Forest. They are more usually found in Eastern Australia! It now seems their numbers have  declined, or indeed they have died out completely here, as the last confirmed sighting was in 1972.

Birds such as the stonechat, meadow pipit and the Dartford warbler live in Ashdown Forest permanently. Summer visitors include the skylark, linnet, yellowhammer and the cuckoo. One interesting winter visitor is the very rare Hen Harrier. Four species of deer live in the woodland, the muntjac, the roe, the sika and the fallow deer are all part of the rich natural tapestry that has somehow managed to survive the centuries. Even Hebridean sheep have even been introduced to Ashdown Forests heathland habitat.

The beautiful natural surroundings mean the area is very popular for walking and horse riding . However, cycling isnt permitted on the woodland tracks although riders can enjoy the many quiet lanes and the Forest Way cycle route at Forest Row . The Royal Ashdown golf club is a popular stop for those that like to add sport to their walking.

The area has long attracted people with environmentally sensitivities and a strong community has grown up around green principles in the area. There is a Rudolph Steiner school locally, this has a strong association with biodynamics. Plaw Hatch Farm is a 200 acre organic farm on the edge of the Ashdown Forest near Sharpthorne . It has been an organic farm for over 30 years and is owned by a charitable trust. The farm is run on biodynamic, or organic, principles and the dairy products produced there are extremely delicious and very popular.