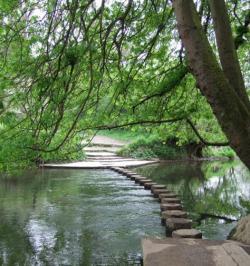 The River Mole rises in West Sussex, not far from the busy international airport at Gatwick , to the south of the village of Rusper . A culvert was constructed to take the course of the river under the runway at Gatwick Airport . The River Mole historically flowed directly into the Thames . During the 1930s, when Hampton Court Way and Hampton Court Bridge were built, the River Mole was redirected to flow into the River Ember and both rivers now enter the Thames in a channel once occupied by the River Ember alone.

Some consider that the name 'mole' was given to the river because some of the flow diverts under the North Downs at Box Hill. The river does this via 'Swallow Holes', and these can lessen the flow here until the river will actually dry up completely in severe drought, as it did in the summer of 1976. The water emerges to join the Mole again on the other side of the hill to re-establish its original volume. Many legends and stories exist about this subterranean feature of the Mole. However, the Oxford Dictionary of English Place Names suggests that Mole is actually a back-formation from Molesey (Mul's island) or is derived from the Latin for 'mill' which is 'mola'. In medieval times the river was known as the Emlyn Stream.

The river lends its name to the Mole Valley, a district of Surrey. The Mole Valley , despite being in one of England's busiest and most populated areas, is a haven for wildlife and biodiversity. Between Thorncroft Manor, just south of Leatherhead , and River Lane in Fetcham lies the Mole Valley Corridor Local Nature Reserve. This stretch of the Mole alone supports 100 species of bird, 20 different mammals, 20 butterfly species and 15 types of dragonfly.

The Mole is credited with having the largest diversity of fish of any English river within its waters. This obviously makes it very popular with fishermen. It's also a favourite hunting ground for the beautiful flying fishing expert, the kingfisher.

Unsurprisingly such natural beauty and diversity so close to many centres of population mean that the Mole is a favourite destination for walkers and cyclists. The North Downs way crosses the river via stepping stones at Box Hill . This area, where the river cuts through the Downs, is known as The Mole Gap and is an especially popular area with walkers. Box Hill itself has, almost since the start of popular motoring, been a meeting place for drivers and motorcyclists. Nowadays, it is mainly motorcycles that are drawn in huge numbers to the car park and café sited next to the busy A24 trunk road at Box Hill, just a few miles north of Dorking .