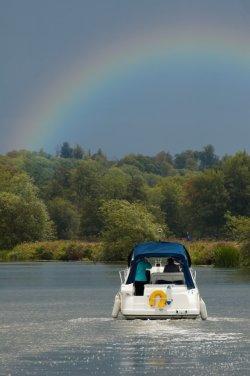 The Thames is the second longest river in Great Britain, after the Severn . It is the longest river entirely in England and is generally associated with London, where many famous bridges cross it. In all, there are 214 bridges, 17 tunnels, six public ferries but not one ford across the Thames.

The Thames rises in the Cotswolds and enters the sea at the Thames Estuary near Southend-On-Sea after a journey of 215 miles. Along the way it passes through several towns and cities that have grown up often because of the presence of the great river. One of the first found down river from the source is historic Oxford , with its ancient university. Oxford has long been a principle tourist destination, especially for overseas visitors.

The river flows through the major southern town of Reading , which is a contender for the title of the largest town in England. Reading stands on the confluence of the Thames and the River Kennet .

Further downstream is the famous Henley-On-Thames , the site of the colourful annual Henley Royal Regatta . The river also flows through Eton , famous for its ancient school and Windsor , home of the British Royal Family and Windsor Castle .

Before reaching the sea the river flows through the English capital itself, London. The river is on of the principle reasons for the existence of London itself, as it provided excellent transport links for early settlers. Londinium, the Roman name for London, was established at the point where the Thames was narrow enough to build a bridge and yet deep enough to handle sea going vessels. Remains of a massive Roman pier base were found in 1981, close to the modern London Bridge.

While there are many miles of beautiful and interesting countryside along the banks of the Thames, and many picturesque and historic towns and villages, London is where the river is most famous. The Thames is broad and fast here and is now crossed by no less than 32 bridges in the Greater London area as well as the Woolwich Ferry and several tunnels. Perhaps the most famous of these is Tower Bridge, often confused with London Bridge itself. Tower Bridge , a combined bascule and suspension bridge, is perhaps the most architecturally outstanding of them all. It presents an iconic image of London that is instantly recognisable all over the world.

Flooding has long been a problem and, because future floods could devastate the important commercial areas of London, a barrier was constructed between 1974 and 1984 at Woolwich Reach. The London Barrier is the second largest flood control structure of its kind in the world.