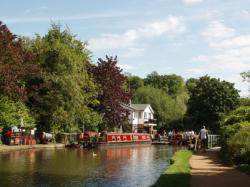 The southern branch of the River Wey has its source at Black Down in the hills surrounding Haslemere . It flows first westwards for fifteen miles before it arcs north through Hampshire and then enters Surrey again near Frensham. The Wey's south branch runs through Liphook , Bramshott, Bordon, Lindford and Frensham to Tilford. At Tilford the river is joined by the north branch of the Wey, which rises near Alton . From Tilford the river runs by Elstead, Eashing, Godalming , Peasmarsh, Shalford, Guildford , Old Woking , Pyrford, Byfleet and Addlestone . The Wey then flows into the Thames at Weybridge .

The upper reaches of the River Wey flow through fields, woodland and meadow. This portion of the river was once the scene of intensive agricultural and industrial activity, with the power of the river harnessed wherever possible. At one point there were 22 mills on the river, and more on its tributaries. At various times they have been used for grinding grains, fulling wool, rolling oats, crushing cattle cake, leather dressing, paper production and gunpowder manufacture. Willey Mill was still in use as late as 1953. Headley Mill is still a working mill today and opens its doors to visitors, the process of stone flour milling can be seen at certain advertised times.

The Wey was one of the first British rivers to be made navigable when it was opened to barge traffic in 1653. This 15¡Ç-mile waterway linked Guildford to London via Weybridge on the Thames. The Godalming Navigations, opened in 1764, enabled barges to work as far as Godalming a further four miles upriver from Guildford. Dapdune Wharf in Guildford is an award-winning visitor centre that uses interactive exhibitions to tell the story of the Navigations and the people who lived and worked on them. Visitors can see where the huge Wey barges were built and climb aboard the Reliance, one of the last surviving barges. Boat trips are also available from the centre. The river is now a very popular destination for pleasure craft and walkers enjoy the areas where the tow path survives or has been restored.

Much of the upper Wey is within the Surrey Hills Area of Outstanding Natural Beauty and there are several Sites of Special Scientific Interest (SSSI) and Nature Reserves along the river. There is a broad diversity of wildlife in evidence as the river passes through a variety of habitats including heathland, woodland and watermeadow.

Fishing is popular on the Wey, with many angling clubs taking advantage of the healthy stocks of fish including Chub, Barbel, Roach, Pike, Bream, Carp, Perch and Eels.