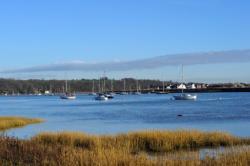 The River Medway flows for 70 miles from just inside the West Sussex border and on through Kent until it enters the Thames Estuary near Medway (Medway Towns).

The Medway has the largest catchment area of any river in southern England. Around 930 square miles of land is drained by the river, with an extensive network of smaller streams and rivers feeding the main river. These tributaries rise from areas of Kent and East Sussex including the North Downs , the Weald and Ashdown Forest .

The River Medway and its tributaries mainly flow through rural areas of Kent that live up to the county's 'Garden Of England' reputation. The main urban areas include Tonbridge , Maidstone and Medway. The River Medway flows in a west-east direction while it is still south of the North Downs. It then turns north after the confluence of the River Beult and cuts through the North Downs at the Medway Gap, a steep and narrow valley near Rochester . It then flows past the Medway Towns and into the Thames Estuary at the Medway Estuary near Sheerness on the Isle of Sheppey .

The natural beauty of the Medway valley makes it a magnet for walkers. The Medway Valley Walk follows the river as it snakes from Saxon Shore Way at Rochester to Allington, near Tonbridge. The North Downs Way runs through the Medway area, crossing the river using either the Medway Viaduct or the motorway bridge. The Greensand Way crosses the Medway at Yalding and is linked to the Wealdway at West Peckham. It continues on through Tonbridge to link up with the Eden Valley Walk.

Maidstone Millennium River Park is a six mile walk from Teston Country Park to the Museum of Kent Life at Sandling. The park was established between 1998 and 2001 when 18 acres of wasteland were transformed into a beauty spot. Three new footbridges were built over the river during the work.

An annual festival, the Maidstone River Festival , is held in Maidstone to celebrate the River Medway. First established, in 1980 the festival is held on the last Saturday of July. A variety of events take place on and around the river, attracting thousands of visitors to Maidstone.

Sailing is very popular on the Medway, especially in the estuary. Chatham is an historic maritime town and the area has many marinas and sailing clubs