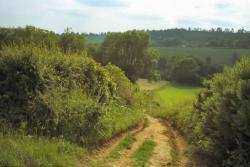 Toys Hill is a 200 acre woodland owned by the National Trust . Situated near a village of the same name near Sevenoaks in Kent, Toys Hill is a designated Site of Special Scientific Interest (SSSI) and is also recognised as a Grade I site of national importance, both because of its abundant wildlife. Now a reserve, Toys Hill was once a hard working piece of land with people depending on it for their livelihood. Toys hill supported charcoal-burners, swineherds and cowherds. The local people also gathered firewood there. Remains of the old charcoal pits can still be seen as you head north along the way-marked orange route.