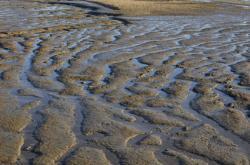 The Thames Estuary is found in south east England and the area is where the River Thames meets the North Sea.

The area known as Sea Reach near Canvey Island in Essex is generally regarded as the western point of the estuary, this marks the point where the Thames Estuary meets the North Sea. To the east, however, there is still some debate as to what counts as the River Thames and what constitutes the estuary. Typically it is given as a line drawn from Harwich in Essex down to North Foreland in Kent, via the Kentish Knock lighthouse. This is the boundary that was originally suggested in the Hydrological Survey carried out between 1882 - 1889.

The lands bordering the estuary are a mix of salt marshes, mudflats and open beaches. The Isle of Sheppey , Foulness Island and Mersea Island are all part of the estuary.

The Thames Estuary has the world's second largest tidal movement. The water can move at a speed of eight miles per hour and can rise as much as four metres. One of the largest wind farms yet developed in the UK is situated in the estuary about six miles north of Herne Bay . The farm contains 30 wind turbines generating a total of 82.4MW of electricity. The much larger London Array of up to 1GW capacity is currently in planning.

Although many of the great docks of East London have either been redeveloped into housing and offices, or lay dormant, there is still a lot of shipping moving in and out of the estuary. Most of the docks moved downstream out of Central London after the Second World War and now The Port Of London is the name given to 70 independently owned ports in London and the estuary area. The main ports of this group are Purfleet , Thurrock, Tilbury (the main container facility), Coryton and Canvey Island in Essex, Dartford and Northfleet in Kent, and Greenwich , Silvertown, Barking , Dagenham and Erith in Greater London.

In the Second World War an air defence system was set up in the area of the Thames estuary north of the Kent coast. These are the Shivering Sands and Red Sands offshore forts. The forts were built to counter attack enemy planes that were using the relative safety of the Thames estuary as a route in to bomb London. Although some of the forts were subsequently damaged or destroyed in shipping accidents, most of them remain to this day quietly rusting in the estuary.