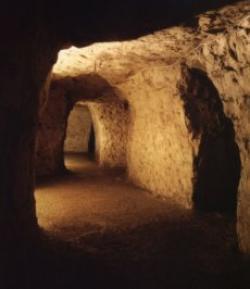 Chislehurst Caves is not a natural feature but in fact a series of tunnels dug by man to extract flint and chalk from the ground. The ancient mine workings stretch for 22 miles and lie near the suburb of Chiselhurst , which is part of the London Borough of Bromley .

Although it is thought that the workings are ancient, their use dates back at least to Celtic and Roman times, the earliest written mention of them actually dates back to 1250. They are believed to have been last worked in the 1830s. The caves became a popular tourist attraction from the 1900s but during World War I they were off limits as they were used by the Royal Arsenal at Woolwich for storing ammunition. In the 1930s the caves were exploited for commercial purposes when they became an ideal spot for cultivating mushrooms.

When war returned again during the 1940s the caves were used as an air raid shelter. They became something of an underground city with as many as 15,000 people sheltering from the Nazi bombs falling on London above. Electric lighting was installed in the caves, as well as a chapel and a hospital. A baby, christened Rose Cavena Wakeman, was born in the caves during the war. Shortly after VE Day the shelter was officially closed.

The versatile caves managed to keep up with the fast moving pace of life after the wars and, especially during the Sixties and Seventies, the caves were often used as a venue for live music. Pink Floyd and The Rolling Stones both performed there, as did David Bowie , Status Quo and the great rock guitarist, Jimi Hendrix. The rock giants Led Zeppelin staged a huge media party at the caves to celebrate the launch of their new record label, Swan Song, in October 1974. The attraction of the caves to musicians is still ongoing, in 2008 the metal band Cradle of Filth filmed a music video there.

The cameras also rolled underground when the caves were used as a back drop to a 1973 Dr Who episode. Later, Bill Oddie presented an episode of 'Seven Natural Wonders' which featured the caves as an example of natural wonders in the London area.

The caves are now once again a tourist attraction. Visitors to the caves today can enjoy them accompanied by an experienced guide on a 45 minute lamp-lit tour. The guide will take the visitor back through both the ancient and recent history of the amazing labyrinth at Chiselhurst Caves .