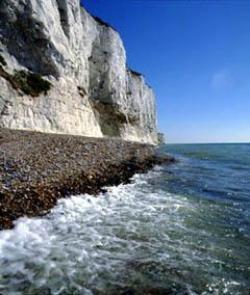 The White Cliffs of Dover are large chalk cliffs that look out to the English Channel from the Kent coast at the Straights of Dover. The cliffs, which face France, are synonymous with England's independence and the defence of the realm. The cliffs stand to the east and west of the ancient port of Dover . The White Cliffs of Dover were usually, especially before the advent of air travel, the first and last thing you saw when leaving or entering England.

The Port of Dover sees millions of people and tonnes of freight pass through it every year. Even after the building of the Channel Tunnel rail link Dover's ferries are just as busy as ever. Dover was once a popular sea side resort in Late- Victorian and Edwardian times. With the growth in the popularity of continental holidays Dover's importance as a tourist beach has waned but the magnificent Norman castle with its miles of underground tunnels remains a popular attraction. Miles of hidden tunnels were first created behind the cliffs during the Middle Ages and these were reworked during the Napoleonic Wars. The tunnels were secretly enlarged again during WWII .

The White Cliffs of Dover have been designated as a Site of Special Scientific Interest (SSSI) for their botanical and geological interest. Part of the cliffs are owned by the National Trust. The site is a unique and fascinating place to visit with its many rare species of plant and birds. The chalk grassland behind the cliffs is home to one of Britain's most diverse plant communities. The cliff faces and the scrubland offer roosting and shelter for the many different species of bird who thrive on the abundance of insects and sea-life there. The cliffs provide a good roosting place for a variety of birds including black-tipped gulls, fulmars and kittiwakes of which there are now over 1100 breeding pairs. This is the only kittiwake nesting site in Kent.

The North Downs Way terminates at the White Cliffs of Dover after meandering through the Kent Downs Area of Outstanding Natural Beauty. Walkers need to take care as the process of erosion is continuous at the cliffs. It can be very dangerous to walk too near to the edge, either on top or below the cliffs.

The cliffs have long been part of popular culture and Vera Lynn , the popular war time entertainer, is famous for her song 'White Cliffs of Dover'.