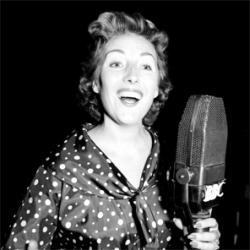 Vera Lynns contribution to the war effort was such that Harry Secombe could quip Churchill didnt beat the Nazis. Vera sang them to death. She was The Forces Sweetheart and is most remembered for her iconic songs. Vera was to later say, somewhat irked: I dont live in the past even though I have never been allowed to forget it.

A born performer Vera Lynn arrived in East Ham in the East End of London on March 20, 1917. By the age of seven she was performing in local clubs and at age 11 had dropped out of school to tour Britain in variety shows. By 1933 Vera Lynn had established herself as a solo singer and with her girl next door appeal her career took off. In 1939 she was voted by British servicemen as their favourite singer.

In 1941 she was given her own radio show, Sincerely Yours, performing such songs as White Cliffs of Dover and Well Meet Again. This classic song became the title track for one of the three films she starred in during the war. Veras contribution to the war effort also included performing for British troops in far flung Egypt, India and Burma. Veras popularity outlived the war and she became the first British performer to top the American charts in 1951. Although she performed new songs it was her wartime anthems which her fans demanded to hear.

Moving to Ditchling in East Sussex Vera Lyn became involved in community projects and fundraising. She was particularly involved with helping war veterans. Honoured in later life she was made an OBE in 1969 and Dame of the British Empire in 1975. Aged 80 she took tea with the Queen and in a nationwide poll was chosen as the Briton who best exemplified the spirit of the 20th century.

Contributors: Do you have a site related to Dame Vera Lynn?
Supply some content for this page and we will gladly add a link to your site. Email here.